Hale Vaping plans to open 75-100 outlets in next two years, before a wider expansion 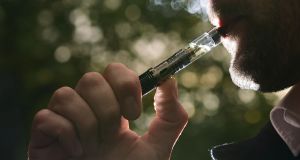 Hale Vaping, which has its headquarters in Dublin and a network of more than 40 Irish shops selling e-cigarette liquids, says it plans a UK rollout of 75-100 new outlets over the next two years.

Company director Vincent Lynch said the company already has funds in place to get the first 40 of those outlets off the ground. He said Hale, which directly employs about 100 staff in Ireland, is in talks with a number of potential UK retail partners.

The company, which has been in operation since 2013, comprises its own brand and franchised retail network, as well as a wholesale network that distributes Hale-branded vaping products to other major retail groups such as BWG, the owner of Spar, and Centra, which is owned by Musgrave.

While audited consolidated figures are not available, Mr Lynch estimated its retail sales were about €15 million.

Its backers include Mr Lynch and fellow Dublin retail investor Declan Fagan, with whom he has previously invested in the Halloween HQ network of stores, most notably at Dundrum Town Centre.

Hale has already opened four UK stores, according to its website, including three in the greater London area and one in Devon.

Mr Lynch said that once its UK rollout is complete, about two-thirds of its stores there will be owned and operated by Hale, while the rest will be franchises. It owns and operates about 25 of its Irish network, with the remainder here franchised.

Mr Lynch said the company “has a decision to make” in terms of selecting a UK partner for its rollout there.

It has also teamed up with a franchise partner in Latvia. Mr Lynch said the company has struck a deal with a Latvian investor who was formerly involved in the Irish retail industry.

The first Latvian Hale Vaping store opened 10 days ago, and there are plans to extend the network to four with their franchise partner.

“We are also looking at Spain and Germany. We believe we have a full, one-size-fits-all franchise offering,” said Mr Lynch.