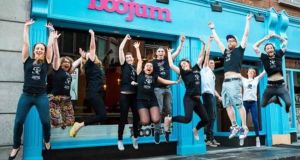 Boojum, a chain of five burrito bars has been sold for in excess of €3 million

Boojum was started eight years ago by Northern Ireland-based couple John and Karen Blisard, and operates two outlets in Dublin, one in Galway and two in Belfast.

Renatus will take a stake of roughly 50 per cent, while Mr Maxwell will take on the other half along with his brother, David Maxwell, who previously ran a number of restaurants in the US.

The latest accounts for Boojum indicate it made profits last year of about £320,000.

It is understood that the new owners plan to expand the chain, although no firms target has yet been set for new outlets in coming years. It is thought the business could eventually sustain about 15 burrito bars, however. The initial growth plan is targeting Ireland, however.

This is the first deal for Renatus, co-founded by the former managing director of the Racing Post in Ireland, Mark Flood, and Brendan Traynor, a former director of BDO Corporate Finance.

The private equity outfit has raised cash from a number of high-net worth irish individuals, and it is understood to be planning. The company is aiming to typically invest between €1 million and €3 million in each deal.