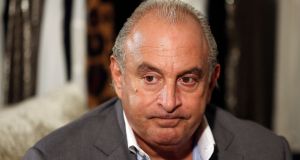 Sir Philip Green: There are calls to strip him of his knighthood unless he volunteers to help plug the £571m black hole in British Home Stores’ pension scheme. Photograph: Simon Dawson/Bloomberg

If Sir Philip Green really thought he was off the hook when he sold the struggling British Homes Stores (BHS) chain to a motley group of investors a year ago, for a token £1 (€1.30), he was sorely mistaken.

The controversial billionaire is facing a storm of criticism over the appointment of administrators at the 88-year-old retail group on Monday, as it finally ran out of cash, putting the jobs of its 11,000 employees at risk.

In an emergency debate in the House of Commons hours after the administrators moved in, Green was branded the “unacceptable face of capitalism” – a phrase famously used by former prime minister Edward Heath in 1973 to describe Tiny Rowland’s Lonrho. Now there are calls for Green – who has just taken delivery of a £100 million super-yacht – to be stripped of his knighthood unless he volunteers to help plug the gap in the now heavily-indebted company’s pension scheme.

There is no suggestion that Green, or the investors who bought BHS from him, plundered the BHS pension as Robert Maxwell did with the Mirror group.

But it’s clear that, even as the business was heading towards collapse, its owners were making millions out of it.

BHS is now burdened by £1.3 billion of debt but at issue is a £571 million black hole in the company’s pension scheme. When Green bought the business, the scheme had a surplus of £5 million.

With 20,000 members – including current and past BHS employees – the scheme is now in the hands of the government’s Pension Protection Fund. While those already receiving their pensions are protected, their inflation-linked rises will be capped, and those employees who retire in the future face a 10 per cent reduction in their entitlements.

Green is thought to have offered to pay £80 million into the scheme, but the pensions regulator has launched an investigation and may force a far higher payment.

MPs are also keen to have a word with Green and plan to summon him to Westminster to appear before the Work and Pensions Committee. Meanwhile Labour MP John Mann, a member of the Treasury Select Committee, demanded that the £400 million of dividends taken out of BHS by Green be put into the pension fund.

“There is a very simple solution to this crisis,” he said. “Repay the dividends, live up to the name he has chosen for his new yacht, Lionheart, or lose his knighthood.”

Like Woolworths, BHS had failed to move with the times and had become an anachronism on the high street.

Its uninspiring mix of dowdy fashion ranges and home furnishings served up in down-at-heel stores were no match for more nimble retail rivals such as Primark or Amazon.

But, starved of investment and loaded with debt, the business founded in 1928 as a UK version of the US Woolworths, had little chance of surviving.

For the time being, the BHS stores will continue to trade as the administrators attempt to find buyers for all or part of the chain.

There were reports that takings in some branches jumped as much as 20 per cent yesterday, as shoppers headed to the stores in search of bargains, or in a bout of nostalgia.

But the chances of BHS surviving intact are slim, and the administrators will struggle to sell the stores to other retail chains, as many are in poor locations.

Less than 10 per cent of the store portfolio is reckoned to be prime space.

The collapse of BHS is the biggest failure on the high street since Woolworths collapsed eight years ago.

And there was more grim news for the retail sector yesterday as Austin Reed, founded in 1900, also fell into the hands of administrators, putting 1,200 jobs at risk.

Like BHS, Austin Reed, which once counted Sir Winston Churchill among its customers, simply fell out of fashion. Fiona Walsh is business editor of theguardian.com