Spuds are nutritious and hardy, and a research centre collaboration is helping defeat hunger in Africa 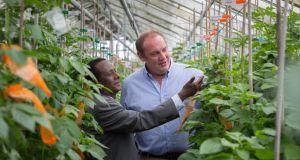 The hills of Chencha in southern Ethiopia, over 2,700m above sea level, are not a place where you might expect the Irish potato to be thriving underground. But in a country where most farmers work on small plots, providing just enough to feed themselves and their family, the humble spud is a popular crop.

In fact, it is estimated there are one million potato farmers in Ethiopia, planting approximately 160,000 hectares annually. The crop – known as the Irish potato across the region – is grown on mainly small half-hectare plots in the highlands, without fertiliser and mostly by women farmers.

The International Potato Institute, based in Peru, estimates that Ethiopia may have the highest potential for potato production of any country in Africa, with 70 per cent of its 13.5 million hectares of arable land suitable to its cultivation.

“We have a history of potatoes in Ethiopia,” explains Gebremedhin Woldegiorgis, senior potato researcher from the Ethiopian Institute of Agricultural Research. “They were first introduced in 1858 and are an important crop for smallholder farmers who are the majority of farmers in the highlands.”

The problem in Ethiopia’s potato story lies largely with its seeds – the seed that is available to farmers is generally of poor quality, with less than 3 per cent of Ethiopian farmers having access to improved or uncontaminated seed. As well as this, farming practices are traditional, which means harvests are far below what Irish potato farmers reap from what they sow. There also has been little focus on tackling diseases such as blight.

So, technicians and scientists like Woldegiorgis in the EIAR research centre – based at Holetta, about 30km from the capital, Addis Ababa – are focusing on improved seed varieties, seed management and production.

Teagasc, which is responsible for R&D, training and advisory services in the agri-food sector in Ireland, is working with the EIAR to share technologies and potato research. “We have an agreement to work together on potato research as well as dairy research,” says potato breeder Denis Griffen, who is based at the 225-hectare Oak Park, the national centre for arable crop research. “We have a lot of experience in researching and selecting seed varieties, in disease research such as late blight and other diseases, and this is all information that can be shared,” he says.

It is not the first time the research centres have worked together. They are both part of an Irish-led collaboration, the Potato Centre of Excellence, which involves partners from science, business and development sectors and Irish Aid. These include Teagasc, the Irish Potato Federation, Irish NGO Vita, and several other other European and Ethiopian administrative and research partners.

Launched in 2012, the centre also acts as the driver for the Irish Potato Coalition, an initiative involving Irish and international NGOs working to share knowledge across six countries – Ethiopia, Malawi, Tanzania, Uganda, Mozambique and Kenya – that account for four million potato farmers.

Their aim is to maximise the benefit that potatoes can provide to rural communities by connecting farmers, researchers, the private sector and local organisations. The centre’s first project, currently being implemented and acting as the pilot, is targeting 100,000 potato farmers in Ethiopia.

But why potatoes? As both Griffen and Woldegiorgis – who is known as “Mr Potato” in Ethiopia – explain, this vegetable yields more nutritious food, more quickly, on less land and in harsher climates, than any other major crops such as wheat, corn or rice.

On average, it matures more quickly than any of these staples – in 90 to 120 days – and edible tubers can be harvested in 60 days. And its water requirement is lower, carbon footprint smaller and it has good potential as a cash crop – because of its bulkiness, it is less suited to trading on the international markets and therefore less vulnerable to price volatility when compared to cereals. As well as all of this, nutritionists rate the quality of the potato protein higher than that of a soybean and a single spud can provide half the daily requirement of vitamin C of an adult, something sea captains realised early on, when they carried potatoes on ships to prevent scurvy in their crew.

According to the 2013 Global Hunger Index, levels of hunger are still “alarming” or “extremely alarming” in 19 countries, including Ethiopia, meaning food security is an urgent issue.

“The potato crop has great potential when it comes to food security. It is the fourth most important food in the world but it has not featured highly in the food security debate,” says John Weakliam, chief executive of Vita, who lead the Centre of Excellence initiative. “However there are problems and in Ethiopia, for example, the same potato seed was being used over and over again so it was damaged. We are introducing a high-quality seed that is adaptable to local soil.”

Considering that the reality for many farmers in the Chencha area is that people go hungry for four months each year, this yield has a big impact.

“There is a four-month hungry season when people have no food,” says Woldegiorgis. In the past, agricultural research has sometimes remained at the national level. “We need to move this learning to communities using so-called ‘extension’ services. People need access to information to improve their yields. The involvement of Teagasc showcases a model that can work for Africa – it is one of the few institutions that represents research, extension/advisory services and training,” he says.

It was an issue highlighted at this month’s African Green Revolution Forum, held in Addis Ababa, which focused on delivering agriculture-led economic growth in sub-Saharan Africa.

Empowering and training smallholder farmers is on the agenda for an obvious reason: some 500 million smallholder farmers – those who tend to work on farms of less than 10 hectares – produce about 70 per cent of the world’s food. On a continent where 200 million people are chronically malnourished and five million people die each year as a result of hunger, there is an urgent focus on the African farmer.

“Ethiopia is one of the highest-performing economies in sub-Saharan Africa, but people are still hungry,”says Woldegiorgis. “We have to and we are changing that. Agriculture is essential and we are learning from Ireland’s story – a country that experienced famine and which has gone on to be a leader in agriculture,” he says.

The potential of Africa’s farmers was also highlighted by Badiane last week. “In Africa, the future colour of gold is green – it’s agriculture.”

African potential: Coffee and beer among products to bring economic empowerment Some 500 million smallholder farmers – those who tend to work on farms of less than 10 hectares – produce about 70 per cent of the world’s food and are a key source of commodities such as coffee and cocoa. So it is not surprising there is a growing trend of international agribusinesses and food companies increasing their involvement with smallholder growers.

“They see the potential of Africa as both a supplier and a growing market,” says Ray Jordan, chief executive of Self Help Africa, now merged with Gorta, which helps farming communities negotiate with international businesses.

Capsule coffee-maker Nespresso seems to smell opportunity in coffee from South Sudan, in east Africa. Farmers there are several years away from providing beans for the capsules, but after receiving the first export, chief executive Jean-Marc Duvoisin wants consumers around the world to sample the brew from the “cradle of coffee”.

In South Sudan, Nespresso is organising farmers into co-operatives and is providing education and training with the assistance of not-for-profit group TechnoServe.

“Only 1-2 per cent of the world’s coffee meets the standards of the beans we need. We want to make sure that we get those supplies,” says Mr Duvoisin. “These companies know that Africa is an important future customer base, with a growing population as well as a growing middle class,” says Mr Jordan.

Brewer SABMiller sees its production of cassava and sorghum beers for certain African markets as a way to boost smallholders as well as accessing new markets.

Ethiopia at a glance Ethiopia is about 15 times the size of Ireland and has a population of 85 million.

There are nine regional states. GomaGofa is one of 20 zones in the Southern Nation, Nationalities and People’s Region (SNNPR) region. It is roughly the size of Cork and Mayo combined and is home to two million people.

The rural area in the country’s southern highlands is characterised by small farms of generally less than three acres – most farms are 1.5 acres.

There are three seasons in Ethiopia, with two main growing seasons for potatoes – the belg and the meher.