Noonan under pressure to protect parents’ gifts from tax liability 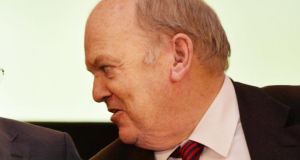 Minister for Finance Michael Noonan is under pressure to amend the Finance Bill to protect gifts from parents to their adult children from tax liabilities.

The Bill proposes to limit an exemption from gift or inheritance tax to people under the age of 18 – or 25 if they remain in full-time education.

Solicitors Arthur Cox say the Finance Bill measure will have unintended and significant consequences for families across the State. It has raised a number of areas where payments could be exposed to taxation, including where parents are helping children in financial distress meet mortgage payments or where they provide support and maintenance to adult children who are permanently incapacitated. Those in part-time education could also be targeted, Anne Corrigan, head of private clients at the firm’s tax department said.

She also notes that parents are “one of the largest categories of unacknowledged providers of microfinance” assisting their children to meet living expenses and set up costs as they establish themselves in a business or profession in a climate where bank funding is tightly restricted.

Revenue has stated categorically that is has no intention of pursuing people over routine “normal” expenditure within families. It said it would be issuing an ebrief on the subject when it is passed into law.

A Revenue spokesman said that Minister for Finance Michael Noonan was aware of some of the issues being raised by tax and legal practitioners over the measure.

Ms Corrigan said the fundamental reform of gift tax had not been mentioned by the Government in outlining Finance Bill provisions and had “gone below the radar” in the Government’s budget measures.

“This is a sledgehammer to crack a nut,” she said, referring to the “handful of people” whose means were such that making significant payments to children was “normal family circumstances”.

“It is perfectly normal that if an adult child needs a digout, parents help out,” she said.

She said the proposal was likely to attract as much anger as the water charge issue, once it was more widely known.

A spokesman for the Department of Finance said the exemption on family transfers was designed to cover “normal and reasonable” payments for the support, maintenance or education of a child. “In practice, the provision was being used in a much looser form than that” he said, and involved “very considerable sums”.

“Frankly, there is evidence of abuse of this provision,” said Donal Murtagh, an assistant principal in the Department.

A Revenue spokesman said yesterday that property sites and cash worth up to €150,00, or even more, were being claimed under the exemption provision in a way that had never been intended.

The Finance Bill has already passed second stage in the Dáil, without the gift tax issue being raised. However, it is understood that an amendment may be tabled by the Government at the upcoming committee stage.

The tightening of the rules does not affect the small gift exemption under which anyone can receive gifts of up to €3,000 in any year from anyone. Adult children could receive up to €6,000 a year from their parents, assuming both parents are still alive.

Gifts under the €3,000 small gift exemption are not counted in this figure.

Where capital acquisitions tax applies, it is levied at 33 per cent.

1 Basic income for all: Has the Covid crisis given us a new economic model?
2 Only way is up for Stripe as valuation skyrockets
3 How long can Government afford to keep State pension age at 66?
4 ‘I don’t need to do any of this. . .I don’t actually need to work.’
5 Promontoria barred from pursuing doctor over Ulster Bank loan
6 Online shoppers face unwelcome tax surprise
7 Fiona Reddan: Who’s afraid of Revolut? Not AIB and BOI it seems
8 Unilever’s Dutch and British arms merge after 90 years ahead of Brexit
9 Musk’s money, Santa’s immunity and Blinken’s Brexit analogy
10 Oxford-AstraZeneca vaccine may be trialled again to prove results were ‘not a mistake’
Real news has value SUBSCRIBE
Save money on international transfers