Diversification: what is the size of the ideal stock portfolio? 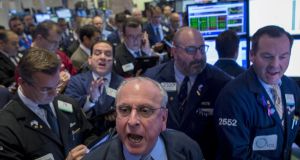 Traders on the floor of the New York Stock Exchange: even novice investors can grasp the simple logic underpinning the case for diversification. Photograph: REUTERS/Brendan McDermid

Everyone knows the old cliché about not putting all your eggs in one basket. A diversified portfolio might consist of different asset classes such as bonds, property and commodities, but what about equities? Exactly how many stocks are enough? Can you be too diversified, or should you aim to hold as many stocks as possible?

Even novice investors can grasp the simple logic underpinning the case for diversification. An individual stock may easily fall by 50 per cent or more in a short space of time, but a portfolio consisting of dozens of stocks is much less likely to do so.

Unfortunately, research has long indicated that investors don’t heed this basic advice. A 1974 study found only 11 per cent of investors held more than 10 stocks, and little improvement was evident over the following decades.

A 2004 study examining more than 60,000 accounts at a US discount brokerage over the 1991-1996 period found the average investor held just four stocks. More than one-quarter held just one stock. Younger, less wealthy and “less sophisticated” investors were especially guilty, while underdiversification also tended to be “more severe in retirement accounts”. These investors paid the price for their over-confidence, badly underperforming their diversified counterparts.

A Random Walk Down Wall Street

Earlier this year, money manager Andrew Wellington argued there are obvious “psychological and behavioural” reasons why a 30-stock portfolio is preferable to a 10-stock portfolio. He gave the example of a coin-flipping game where you win $500 if it’s heads, but lose $100 if it’s tails. Any investor will take that bet - a 5:1 payoff on a 50:50 bet is a good deal. However, if the bet is tweaked so that you win $5 million on heads but lose $1 million on tails, few investors will take the bet.

“There are fantastic risk/reward opportunities that you are willing to do at 3 per cent of your portfolio that you might be unwilling to do at 10 per cent,” noted Wellington. “When a position gets that big, you look for perfection and there’s no such thing. You become overly sensitive to the downside, remote as it may be. And for every unit of downside you eliminate, you tend to sacrifice multiple units of upside and, over the long run, end up with lower returns.”

The volatility of individual stocks has escalated sharply in recent decades, he says, causing him to change his mind on the idea of 20-stock portfolios.

Investors might need to hold as many as 200 stocks to get the same level of diversification afforded to them by 20 stocks in the 1960s, says Malkiel.

“If you think that you can do an adequate job of minimising portfolio risk with 15 or 30 stocks, then you are imperilling your financial future and the future of those who depend on you,” he writes. Even 200 stocks are not enough; only by owning the whole market can investors “truly minimise the risks of stock ownership”.

Bernstein’s says a handful of “superstocks” have historically accounted for the bulk of market returns.

More recently, the overall market has been powered higher by Apple; a $1,000 investment in Apple shares in early 2003 would be worth more than $120,000 today.

If your portfolio does not hold tomorrow’s superstocks – and it’s very unlikely it will if you are invested in only 20 or 30 stocks – then it runs the risk of serious underperformance, he argues.

Separate research conducted by Longboard Asset Management found that, between 1983 and 2006, 39 per cent of stocks were unprofitable and almost two-thirds underperformed the market. Again, a minority of stocks accounted for all the market gains.

Investors can now access hundreds of stocks by buying an index fund covering a particular market, but a global fund would be better again. Some markets – think Japan, where stocks have roughly halved in value since 1989 – can stagnate for decades.

Most investors are prone to home bias, the tendency to stick to stocks in their home country, resulting in undiversified portfolios.

However, anyone looking to beat the market is better off with a concentrated portfolio of, say, 30 stocks. The more stocks you hold, the more your returns will mirror the overall market.

In other words, any active fund with 100 or more stocks has little chance of beating the market.

Ironically, research suggests many fund managers are skilled stock-pickers, but they are undone by an insistence that they be diversified. According to a 2010 study, the top holdings of funds – likely to be high-conviction holdings – easily outperform the market.

However, their smaller holdings underperform. Poor fund performance, the study concluded, is due to “institutional factors that encourage them to over-diversify” – that is, they are forced to pick too many stocks.

In such cases, writes money manager and Alpha Architect blogger Dr Wesley Gray, diversification morphs into “diworsification”. He suggests 30-50 stocks is the “sweet spot” active investors should aim for.

“We probably want Warren Buffett to hold 30 or so stocks to ensure he doesn’t completely blow up”, he says, “but we don’t want to force him to hold more than that, because it is unlikely he has more than 30 good ideas.”

Buffett also recognises his own fallibility; earlier this year, he admitted he was too slow in offloading his stake in Tesco, saying that “thumb-sucking” cost him $444 million. No doubt, he would be puzzled by those who bet the farm on a handful of stocks. Everyone gets things wrong – even Buffett. That’s why “the only investors who shouldn’t diversify”, to quote another legendary investor, John Templeton, “are those who are right 100 per cent of the time”.