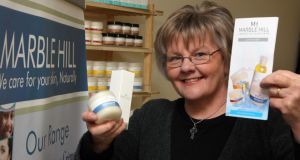 Dr Maria McGee, founder of Marble Hill Soaps and the brains behind PediSalve

One of the difficulties experienced by those with diabetes is problems with the skin on their feet. The nerves controlling the flow of moisture get damaged and the feet can become dry and cracked. This can lead to potentially grave consequences.

“Poor care of the diabetic foot is the leading cause of amputation of the lower limb in our hospitals,” says Dr Maria McGee, founder of Marble Hill Soaps and the brains behind PediSalve, a new hypoallergenic foot cream aimed at those with diabetes but also suitable for general use.

“PediSalve goes on easily, is quickly absorbed and provides the intense moisture the diabetic foot needs. There is no big effort involved in applying the product as there can with some heavy moisturising creams and this will hopefully encourage diabetics to implement a regular foot care regime and to stick with it,” she says.

McGee is no stranger to dealing with skin problems. Her children suffered from eczema when growing up and her husband, who is a surgeon, developed a problem from constantly scrubbing up with heavy-duty cleansers.

McGee began by making products for her family and the business developed from there. Marble Hill now has a number of skincare products in its range aimed at bringing relief from conditions such as eczema, acne, seborrhoeic dermatitis and psoriasis.

“My interest was in finding a blend of ingredients that worked with the skin to sooth and moisturise, not against it to cause irritation,” she says.

“This led me to some very traditional ingredients such as neem and argan oils and shea butter. Shea butter is the main ingredient in PediSalve. The reason we do not see it for sale is because it is notoriously difficult to handle.

“We have spent a number of years developing a method of producing it in a consistent, usable way. This technical competence underpins our ability to produce PediSalve in volume as demand grows.”

The company’s initial target market is Ireland where around 500,000 people have diabetes. However ,McGee says this is a product that could go global. There has already been strong interest in the product from a potential distributor in the Middle East.

To date, the company has been primarily selling online but there is now a push to get the product on the radar of foot care professionals, the NHS and pharmacies.

Marble Hill is based in Derry and employs four people. The company has received support from Invest Northern Ireland and has recently been awarded an innovation voucher, which it will use for a research project in conjunction with the University of Ulster at Jordanstown. McGee estimates investment in the business to this point at about €100,000.

1 Google tells workers to return to country where they are employed
2 Sean Quinn stunned at rebranding of Quinn Industrial Holdings
3 Probate is changing: What does that mean for you?
4 Will tracker mortgage be at risk if Ulster Bank closes?
5 Whistleblower warned EY of Wirecard fraud four years before collapse
6 Google ups bid to clinch approval for $2.1bn Fitbit takeover
7 Subway franchisee loses Supreme Court claim for zero VAT liability
8 Seán Quinn on rebrand, Irish golf tourism wipeout, and probate changes
9 Three Ireland switches on 5G network around the country
10 Me & My Money: ‘Money can’t buy you happiness but it can make life a lot easier’
Real news has value SUBSCRIBE