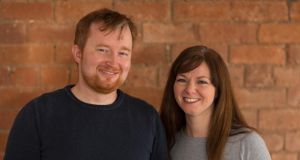 In 2009, Belfast-based husband and wife team Anita Murphy and Rory O’Connor launched Rory’s Story Cubes, a non-competitive storytelling game designed to spark the imagination of players of all ages. Since then sales of the original story cube have exceeded 2.5 million units worldwide. This sales success has funded the development of the couple’s second game, The Extraordinaires, which has just gone on sale.

The Extraordinaires is a design game aimed at the over eights. In it a cast of weird and wonderful characters need an everyday item that the players must design.

The challenge is that each character has “an issue” that the design must overcome. For example, the pirate needs a remote control but he has a hook hand so the design has to accommodate this.

“The Extraordinaires poses a series of design problems using archetypal figures children will identify with such as a wizard, a giant, a ninja and a fairy. It is up to the players to solve the problem in their own way,” explains Murphy.

“Children today live in a very fast-moving, fast-changing world. They need to be able to think laterally and to understand that there may not be a single right answer to something. We set ourselves the task of designing a game that would teach these concepts in a playful way while stimulating discussion and fostering empathy and creativity.”

Murphy and O’Connor met while studying at art college. Murphy subsequently worked on web technology and interface design at the BBC in Belfast while O’Connor went into animation and worked with groups such as the street-theatre company, Macnas. The couple founded The Creativity Hub five years ago and it now employs eight people.

“Because of really strong sales of the story cubes (mainly outside Ireland) we have had the financial independence to do what we want and haven’t had to look for outside money,” O’Connor says.

“I think there is a perception that the entire games market is controlled by large companies to the exclusion of smaller players. In fact that’s not the case. There are about 1,000 new board and card games released every year and there is a huge global market and appetite for creative play. In other countries this is reflected in a far wider choice of games than we have available here. Rory’s Story Cubes have made their way all over the world and we are actually much better known outside Ireland.”

The Extraordinaires has been more than 18 months in the making at a development cost of around €85,000 excluding thinking and testing time. “We have put a lot of thought into making our products very different to what’s out there in terms of the content and the design. It may take a little longer to win people over with something less familiar, but when they ‘get’ what you’re about they really buy into it,” Murphy says.