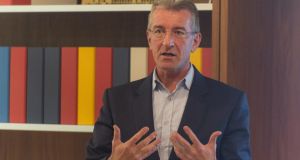 Didier Bonnet: “Becoming a digital master is challenging but there has never been a better time. The longer you wait, the more difficult it will become.”

Companies that have mastered their digital strategy to become world-class players – with high levels of productivity and profitability – are hard to find outside the realms of the tech sector.

Nonetheless, they do exist and they provide valuable lessons for the 90 per cent plus of companies that fall into the category of traditional, rather than born digital, organisations.

That is the message from Didier Bonnet, co-author of Leading Digital – Turning Technology into Business Transformation (Harvard Business Review Press).

Bonnet and his co-authors, George Westerman and Andrew McAfee, spent four years researching the subject, deliberately eschewing Silicon Valley’s stars, whose stories are well documented, to look at the approach of traditional organisations.

“When we looked at it,” he tells The Irish Times, “nearly all the research was about media, software and publishing companies – firms that only account for 6 per cent of global GDP. We wanted to know what was going on with the other 94 per cent.”

Initially, 150 executives were interviewed across 50 major global companies, with a follow-up survey of about 400 firms. Two quick discoveries were made.

Firms that struggle to become truly digital are those that fail to adapt to work in a different way around digital and also fail to develop the leadership capabilities required to set and execute a digital vision.

The corollary was that when both features are present – one alone wasn’t sufficient – exceptional results were achieved. Digital masters, as they authors style these companies, typically achieved 26 per cent more profitability than their peers.

The third and final piece in this jigsaw is exceptional customer engagement.

“It had already built up strong capabilities in social listening and mass customisation when it decided to take this to a new level in 2010 when it established Nike Digital Sport. This linked its digital efforts together more tightly, with teams of marketers, designers and IT specialists working together to develop digital innovations.”

The goal is to create a centre that can reflect – and even shape – rapidly evolving customer preferences.

Nike is admittedly a sexy example but digital transformation can happen in even the dullest of companies, it seems.

Chilean mining firm Codelco, one of the largest producers of copper in the world, found it hard to get young workers to travel from the main cities in Chile to work in remotely located mines but it found that necessity could be the mother of invention.

It started employing remote technologies, initially to monitor the mines, then to do overground work with robots. Buoyed by this success, it then deployed the robots to work underground.

“This transformed the business as drilling that was unsuitable for humans, for safety reasons, for example, now became practicable,” Bonnet notes. “There was no road-map for this but changing the mind-set has had enormously positive effects.”

Codelco is an example where employees engaged with the deployment of the technology, something that doesn’t always happen.

“There’s a big difference between deployment and adoption,” Bonnet observes. “There is no point investing in technology if you don’t get buy-in, so smart companies realise that putting the infrastructure in is only a fraction of the cost of having it widely adopted.”

A common mistake is to pay for the technology then skimp on the training and follow-through to ensure that it provides the real return on investment that only comes when it is embedded into the culture of the organisation.

Having the right metrics is important – ones that focus on getting true business value, he adds. These can include collaboration among actively engaged users, smarter decision-making, increased sharing of best practices and sustained behaviour change.

Despite the currently fashionable management guru advice to “let a thousand flowers bloom”, Bonnet says that he and his colleagues saw no evidence of “bottom-up” business transformation and that typically, transformative change into digital mastery involved a visionary leader working with just a handful of senior managers. Leading from the front and spreading the vision often involves risk, however.

“We may not have solved major business issues by having this bitch session but with my support, employees know that it is safe to be heard, that dialogue is encouraged and feedback is actionable,” he notes.

Bonnet, who is a speaker at next month’s Mindshare Business Breakfast at the BT Young Scientist & Technology Exhibition at the RDS in Dublin, concludes that in the next 10 years, industries, economies and societies will be transformed by technologies that until recently have only existed in the realms of science fiction.

“Becoming a digital master is challenging but there has never been a better time,” he says. “The longer you wait, the more difficult it will become.”