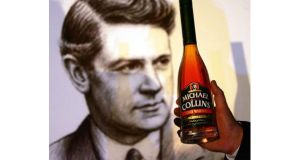 Cooley Distillery produced about 30,000 cases of Michael Collins whiskey last year for Sidney Frank, a New York-based drinks company that owns the brand. The spirit accounted for the entire growth in the Irish company's output.

Profits at Cooley Distillery, a Louth-based whiskey maker controlled by entrepreneur John Teeling, increased by more than 20 per cent last year to €1.6 million, helped by the successful launch of Michael Collins Irish Whiskey in America.

Cooley produced about 30,000 cases of Michael Collins whiskey last year for Sidney Frank, a New York-based drinks company that owns the brand. The spirit was formally launched in America on St Patrick's Day and accounted for the entire growth in the Irish company's output, which rose from 180,000 cases of whiskey in 2005 to 210,000 cases last year.

The whiskey features a picture of the so-called "Big Fella" on its label as well as Collins's signature. It was launched in Ireland in early December and was heavily criticised by Fine Gael councillors in Collins's native Cork.

Last year marked a turnaround in Cooley's fortunes. Revenues and profits both declined in 2005 as the company struggled to secure distribution in a market dominated by a few large drinks groups, including Pernod-Ricard, owner of the Jameson brand.

But the introduction of Michael Collins helped the company to increase its sales by about 10 per cent to €11 million in the year to the end of December, Dr Teeling said.

Borrowings also rose by 10 per cent to €12 million, following the building of a new warehouse at its Louth base.

Sales of Irish whiskey have boomed worldwide, led by Jameson, the market leader. In the six months to the end of December, Jameson sales increased by 11 per cent, led by strong volumes in Russia and South Africa.

Dr Teeling said South Africa was a "good market" for Cooley, but it had yet to enter Russia. "That's something we're looking at, but it will take a little time."

He added that Cooley would spend more than €4 million on marketing costs in 2007, an increase of about €750,000 on last year. The main focus will be on pushing its Connemara, Kilbeggan and Tyrconnell brands, particularly its premium-priced bottles in those ranges.

In addition, Cooley has recruited Tony Kavanagh, a UK-based executive formerly with Allied Domecq, to drive sales of its own-label whiskey, which is produced for British supermarket groups, including Tesco, J Sainsbury and Asda. It also has contracts to supply own-brand spirits to Dunnes Stores and Lidl in Ireland and Carrefour and Intermarche in France.

"Our own-brand division has suffered a bit in recent years and Tony's appointment is aimed at addressing that," Dr Teeling said.

"But we've had a good year helped by the new Michael Collins whiskey. We've also done well on our own premium brand whiskeys but we're a small player in the Irish whiskey market and it remains a tough market for us."

1 We are ‘sale agreed’, but can we go back with a lower offer?
2 Working from home: New costs, new stresses and little relief
3 Eason to lay off 150 staff as it prepares for June reopening
4 Restaurants and gastropubs hope to avoid a dry reopening
5 HSBC board rethinks overhaul and seeks even deeper cuts
6 Ryanair to challenge Lufthansa’s €9bn aid
7 Merck leaps into Covid-19 development fray with vaccine, drug deals
8 New pre-booking app for customers a hit with retailers
9 Joint accounts: if one of us dies, can the other access the money?
10 Hot-desking continues at bank call centres, workers say
Real news has value SUBSCRIBE