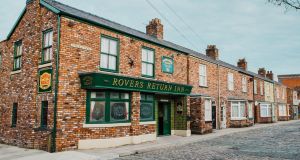 Virgin Media said the agreement with ITV, which bought the two UTV channels last autumn, will also see it take over a 10-year deal for ITV-produced programmes including soap operas Coronation Street and Emmerdale.

Virgin Media has bought UTV Ireland from ITV plc for €10 million in a deal that unites UTV Ireland with TV3 under the same ownership.

Virgin Media said the agreement with ITV, which bought the two UTV channels last autumn, will also see it take over a 10-year supply deal for ITV-produced programmes including soap operas Coronation Street and Emmerdale.

On completion of the acquisition, UTV Ireland will become part of Virgin Media, a subsidiary of John Malone’s cable television and broadband group Liberty Global.

The company, which bought TV3 Group for €80 million last July, said this was “an essential step to securing the channel’s long-term future”. The purchase price will be funded through Virgin’s existing liquidity.

“Virgin Media’s investment in TV3 has already supported the expansion of our studio facilities and increased production,” Mr Kiely said.

“The proposed acquisition of UTV Ireland will ensure further investment in the independent Irish television sector as we continue to compete head on against significant local and international competition.”

The acquisition will be subject to competition and regulatory approval from the Competition and Consumer Protection Commission and the Broadcasting Authority of Ireland, as well as a separate media plurality test by the Department of Communications. This is likely to take some months.

UTV Ireland was launched in January 2015 by Belfast-based UTV Media, but after a string of profit warnings, both the original UTV channel aimed at viewers in Northern Ireland and Dublin’s UTV Ireland were sold to ITV for a price tag of £100 million.

The rest of the Belfast company became the radio-focused Wireless Group and was sold to News Corp two weeks ago.

“ITV took over the business a few months ago and we’ve concluded that bringing TV3 and UTV Ireland together under common ownership offers the best prospect of delivering a strong and sustainable Irish commercial broadcaster, underpinned by a long-term programming agreement with ITV.”

Mr Swords said ITV recognised that this had been “an uncertain period” for the staff of UTV and UTV Ireland.

“We have been determined to reach a speedy resolution. We believe that the decision we have made represents an important step forward for the future of the channel.”

TV3, which also owns the channel 3e, saw its share of the Irish television audience and advertising revenues suffer after UTV swooped for the rights to the ITV soap operas and other hit shows from 2015 onwards. However, the new channel did not reach the viewership targets it set for itself and its first-year losses spiralled to more than €18 million.

The acquisition of UTV Ireland means TV3 has effectively taken back control of the soap opera cash cows and it may decide to transfer them to the TV3 channel rather than keeping them on UTV Ireland.

Ahead of its launch, UTV Ireland built a newsroom and small studio in Dublin’s Docklands, which was opened in December 2014 by Taoiseach Enda Kenny.

It initially employed about 100 people across its news, sales and management teams. Several of its highest-profile hires, including head of channel Mary Curtis and news presenter Chris Donoghue have since departed the company, while a chat show series hosted by Pat Kenny was cancelled in the middle of its run.

The Virgin Media acquisition means RTÉ is likely to face increased competition from a single, strengthened rival, led by the TV3 operation at Ballymount.