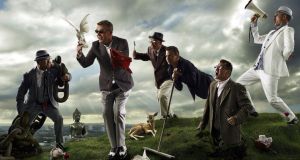 Madness, the headline act for the Countdown Concert, will be “a massive draw”, according to Three’s chief commercial officer Elaine Carey, who cites the exuberance of the band’s performance on top of Buckingham Palace for the Queen’s Diamond Jubilee Concert.

Carey won’t say how much Three has put into the event but says it’s “a big investment, not small money” and that it will pay off in terms of engagement with the brand “at a really nice time of year”.

Indeed, New Year’s Eve and Day is party time for telecoms companies, with few of the melancholic downsides to which the rest of us succumb.

Last time around, some 1.1 billion photographs were uploaded globally to Facebook over the two days, while Three Ireland’s 500,000 customers sent 5.2 million SMS messages between them.

It also doesn’t do any harm that the audience for RTÉ’s coverage of the 2012/13 concert peaked at 1.3 million. “It’s all about what you get for your money,” says Carey.

Three Ireland’s New Year’s wish list is likely to be topped by a smooth clearing of its takeover of O2 Ireland – that’s if the Competition Authority doesn’t do the honours between now and the opening bars of a ska-infused Auld Lang’s Syne.