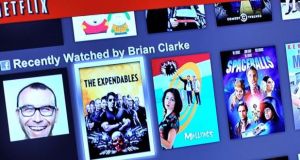 Video streaming pioneer Netflix added more subscribers than projected in the United States and abroad during the first quarter, .

Net subscriber additions rose 22 per cent year-over-year to 4.88 million in the March quarter, beating the company’s forecast of 4.05 million.

The company that shook up television with original shows such as House of Cards has been aggressively building its overseas presence as growth slows in the United States. It launched services in Australia and New Zealand in the quarter and expects to start in Japan later this year.

Customers spent more time than ever watching Netflix, streaming 10 billion hours of programming in the quarter, the company said.

The company said it expects to sign up 600,000 more US customers in the current quarter, plus 2.5 million worldwide.

The company has been investing in original shows to fend off competition from Time Warner’s HBO, Amazon. com and Hulu, as well as on-demand offerings from pay TV providers.

Netflix said retention of customers improved in the United States. “As they build up their catalog of original titles, they’re going to keep more and more customers,” Wedbush Securities analyst Michael Pachter said.

The company also said it would ask its board to approve a stock split.

Spending on international expansion hit first-quarter earnings, which more than halved to $23.7 million, or 38 cents per share.