‘Line of Duty’ will return for third series

The BBC drama’s second run, which concluded last night, was filmed in Belfast 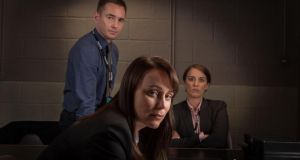 BBC police thriller Line of Duty, which is produced in Northern Ireland, is set to be recommissioned for a third series.

Written by Cardiac Arrest and Bodies screenwriter Jed Mercurio, the drama focuses on the activities of a police anti-corruption unit, with the action taking place in an anonymous English city.

For legal reasons, the BBC asked the makers of the programme, World Productions, not to set the drama in a specific location because of its sensitive subject matter.

The first series of the drama was made in Birmingham, but the production switched to Belfast for the second six-part run and is expected to remain there for a third series.

The second series garnered solid audience ratings of more than 3 million for BBC Two and has picked up a strong uplift in the consolidated ratings (which include catch-up viewing on digital recording devices).

It concluded on BBC Two last night, with viewers finding out whether or not Hawes’s character was involved in a criminal conspiracy.

The UK’s public service broadcaster has committed to decentralising a certain percentage of its network-wide programming to the regions and has given BBC Northern Ireland annual production targets.

The second series of the BBC serial killer drama The Fall, which also has some backing from RTÉ, is now filming in Belfast, while BBC Northern Ireland also makes the daytime series Wanted Down Under for the wider network.

The BBC is expected to confirm the third series of Line of Duty once a new channel controller is appointed to BBC Two.

Mercurio, a former hospital doctor who is also a novelist, is serving as showrunner on a new medical drama Critical, which is currently in production and will be broadcast on Sky One next year.