INM to spend up to €100m buying other media companies 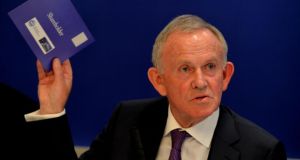 Independent News & Media plans to spend up to €100 million on media sector acquisitions in Ireland and the UK and will not rule out buying broadcaster TV3, INM chairman Leslie Buckley has said.

Speaking after the company’s agm in Dublin, Mr Buckley said the now debt-free INM has “close to €30 million in the bank, for the first time in a long time”, and with the support of its lenders could spend €80-€100 million on a new expansion.

“What the company needs to do is ideally make a number of acquisitions,” said Mr Buckley. “That way, we’re going to hopefully significantly improve the value of the company.”

Shareholders are unlikely to receive dividends until the company goes on the acquisition trail. Although INM’s advertising revenues are rising again, they are not yet fully offsetting the decline in circulation income. This makes acquisitions the most means by which the company will grow.

“One way or another, I believe that consolidation in this sector is really badly needed. We have to stand back and say where is this business going to be , where is this sector going to go, in five years’ time? There are services that we can all share like IT, distribution, printing.”

Mr Buckley said INM would target digital media acquisitions in the first instance, and then “anything in the media sector”. He would “not be opposed” to buying another newspaper “if it was at the right price”.

Asked about TV3, which has been put on the market by its investment company owners Doughty Hanson, he said INM was “looking at everything in the media, now that we are in a position to do so”.

Mr Buckley’s comments come in a week in which Minister for Communications Alex White is understood to have brought finalised guidelines on media mergers to the Cabinet.

The new legislative regime gives Mr White the ultimate responsibility for approving, rejecting or stipulating conditions for media mergers in Ireland. The laws and regulations are designed to prevent a single individual or entity from amassing “undue” ownership or control in the media sector.

INM chief executive Robert Pitt confirmed that the group did not send legal representation to a High Court hearing on Tuesday, at which RTÉ, The Irish Times and the Sunday Business Post sought clarification on whether remarks made in the Dáil by Catherine Murphy TD about Mr O’Brien’s business affairs could be reported. The Sunday Times and Broadsheet.ie had previously reported Ms Murphy’s statement.

“That’s an editorial matter. There was a lot of representation there at that. We reported on it fully throughout the week,” Mr Pitt said. Its absence at the court hearing does not reflect “the quality or the volume of attention that we are giving the story”, he added.

“There is an absolute editorial freedom in INM,” said Mr Buckley, who is a business associate of Mr O’Brien. “I think this view that Denis O’Brien has any influence editorially at what happens in INM is nonsense.”

INM, the company behind Independent.ie and the Irish Independent, Sunday Independent, Herald and Sunday World newspapers, among other titles, has recently cleared a heavy debt burden through a combination of a writedown from its lenders, a pension scheme restructuring and the sale of its interests in South Africa and Australia.

It has also cut operational costs through a series of redundancy schemes, the most recent of which targeted 30 voluntary departures from its editorial staff in Dublin - some 28 of these have now been secured.

Mr Pitt said the group needed to “start thinking ahead”. It has expanded its digital sales and editorial teams and is hiring up to 16 journalism graduates. The company is also “at an advanced stage” in selecting a replacement for Fiona O’Carroll, the recently departed managing director of digital.