INM to seek up to 30 voluntary redundancies

Print operations will be merged, but titles won’t become ‘vanilla’ 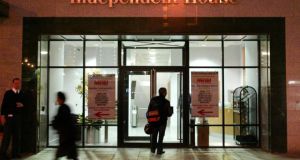 Independent News & Media is to seek up to 30 voluntary redundancies - or about one in eight editorial jobs - as part of a shake-up of its newsroom, it told staff on Thursday at a “town hall” meeting in Dublin’s Odeon cinema.

“But we are going to change how we organise ourselves, and make sure that we are fit for the future,” Mr Pitt said after the meeting.

The company is accelerating recent moves to centralise its news operations around a single news desk for its print and digital products. A plan to fully integrate the production operations of the four national titles will require “a major redesign of the newsroom” at INM headquarters in Talbot Street in Dublin, as well as investment in technology and training.

There will be “a maximum” of 30 voluntary redundancies out of a newsroom editorial staff of about 230 across the titles.

INM will advertise the position of group head of sport to oversee a single sports desk, replicating a system it has already put in place for its business and politics coverage.

Although print production resources will be merged, the individual newspaper titles will retain their brand identities and masthead-specific editors and will not become “vanilla or blancmange”, Mr Pitt said.

The company is “very, very happy” to retain its interest in Irish Daily Star publisher Independent Star Ltd, a joint venture with Northern & Shell, he added. “We look forward to a long future with it.”

Mr Pitt said there were no plans for INM to share content with Communicorp, the radio group owned by INM’s biggest shareholder Denis O’Brien, or any other media company.

INM editor-in-chief Stephen Rae said the company continued to find itself “in a very volatile and uncertain environment, more than that experienced in any industry in the last 100 years.” Some job functions that had been “fit for print” were “not fit for the journey we’re on”, he said.

Mr Pitt, who joined INM from Tesco, said he expected print circulation would further decline, but that there would still be some form of printed newspaper in 10 years’ time. “It might be different paper, it might be a different size.”

Over the past two years, INM has been in cost-cutting mode in a bid to pay down its bank debt and shift its resources towards digital platforms.

A number of employees left the Herald and the Sunday World under voluntary schemes last year, while some 50 jobs were lost from Real-time Editing & Design (RE&D), a company to which it had outsourced sub-editing tasks. However, INM also hired 29 editorial employees last year to work on in-house production and online reporting.

There are no plans for a digital paywall “at this moment”, Mr Pitt said, adding that he couldn’t comment on the long-term strategy.

INM, a publicly listed company, is currently in a closed period ahead of its next earnings update to shareholders, meaning there are stock market reporting restrictions on what its management can say about its financial performance.

1 How much state pension will I get next year?
2 Housing crisis here to stay in absence of big rethink, industry warns
3 Am I crazy to consider switching to an Ulster Bank mortgage?
4 Up or down – how much is your Local Property Tax this year?
5 Avolon appoints Paul Geaney as chief risk officer
6 Brexit to curb services trade with UK, accountants group warns
7 PTSB plays down Ulster Bank talk as it sells €1.4bn of loans
8 How long can Government afford to keep State pension age at 66?
9 EU bank watchdog may need to revisit payment breaks
10 Irish tech company Asavie acquired by Nasdaq-listed Akamai
Real news has value SUBSCRIBE