INM talk not of media diversity, but of industry consolidation 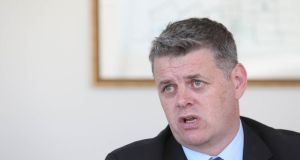 Robert Pitt: Has always maintained that he was “positive on print”. Photograph: Fran Veale

After a couple of snack purchases, Independent News & Media (INM) has committed to an acquisition of consequence, announcing late on Friday that it has bought Celtic Media Group, the owner of seven regional newspaper titles.

With the undisclosed price tag likely sitting at a few million euro, it may not be the bulkiest Irish buy that INM chief executive Robert Pitt ever makes. But whereas the ex-Tesco executive’s previous outlays were the equivalent of a contactless-payment purchase in the baskets-only queue, the Celtic Media Group is at least the kind of company that requires a trolley to wheel it to the check-out.

So for INM shareholders waiting for the Irish Independent publisher to deliver on its strategy of growth through acquisition – with the aid of some €62.5 million in net cash – the Celtic Media Group deal will feel like a positive development, one to tide the company over as it searches for the elusive prospect of a digital media business with a solid revenue stream.

The deal, however, will have to be cleared by both the Competition and Consumer Protection Commission and the Minister for Communications Denis Naughten before INM can take it home, and not everyone is keen on the idea that it will. Over the weekend the National Union of Journalists issued a blunt statement saying it was “gravely concerned” by the news.

The NUJ wants Naughten to order a full investigation. In theory, under the cross-media ownership regulations, this could end up being carried out by the Broadcasting Authority of Ireland, despite the fact that the deal ostensibly involves two newspaper groups.

The NUJ’s alarm is informed by INM’s open desire to identify targets for cuts on an almost continual basis. Only last week INM announced it was axing 14 production and sub-editing positions – core functions to any newspaper – and outsourcing the work to Press Association, with some “quality control and archive” positions going to Belfast company RE&D.

The NUJ places the total job-loss tally, including contract and other non-permanent positions, at 27.

Overloaded newspaper journalists might spare a thought for competition regulators with mounting caseloads. The past year has seen a notable number of significant media takeovers: Virgin Media bought TV3, Eir treated itself to Setanta Sports, News Corp picked up six radio stations based in the Republic as part of its purchase of Wireless Group and Virgin Media then acquired UTV Ireland.

It is the first one to involve two groups that derive most of their revenues from printed news and the first one to concern INM’s largest shareholder and the owner of the Communicorp radio empire, Denis O’Brien. It is the O’Brien factor that could then trigger the BAI’s involvement.

Celtic Media Group’s titles are, in the context of Irish regional newspapers, meaty ones with loyal followings. They are the Anglo Celt (Cavan), the Meath Chronicle, the Westmeath Examiner (Mullingar), the Westmeath Independent (Athlone), the free Offaly Independent and the Connaught Telegraph, all of which publish weekly, while the group also owns the fortnightly, free south Meath title Forum.

Before 2012, Celtic Media Group was owned by Scottish media company Dunfermline Press, which spent an eye-watering €65 million acquiring six titles between late 2002 and mid-2004. In 2012, Dunfermline put the Irish business into receivership and it was bought out for €5.5 million by its management, led by former Irish Independent business editor Frank Mulrennan, while the Connaught Telegraph was later added to the stable.

Despite this year’s “accelerated decline” in print advertising, Pitt has always maintained that he was “positive on print”. This deal confirms his and INM’s belief that a dominant player can make money from print in the medium-term, but only if costs can be slashed and “synergised” across the group and some rivals mopped up and brought into the fold.

Print circulation and advertising revenues may not yet have reached a definitive plateau, but INM clearly believes that one will be reached at some point otherwise it would hardly be doubling down on it.

In its boardroom the talk is not of media diversity but of industry consolidation as a means to survival. The group’s shopping days are not over. Indeed, it’s not completely impossible to envisage a future in which INM ends up owning, say, the Irish Examiner too.

But as far as this deal is concerned, the parties involved will no doubt stress to regulators that few companies out there fancy newspaper publishing these days, and to knock back one such company would pose an even greater, and politically more unpalatable, risk to plurality and employment.