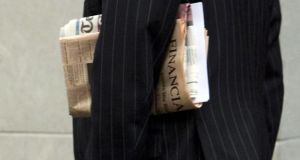 FT.com subscriptions grew 21 per cent to almost 504,000, with digital now representing 70 per cent of the Financial Times’ total paying audience.

The Financial Times reported a sharp increase in profits in 2014, driven by growth in subscription and digital revenues and a record high circulation.

The FT’s total circulation grew 10 per cent year-on-year to nearly 720,000 across print and online, the company said.

FT.com subscriptions grew 21 per cent to almost 504,000, with digital now representing 70 per cent of the Financial Times’ total paying audience.

The FT’s publisher, Pearson meanwhile forecast that earnings may rise as much as 20 per cent in 2015, signaling that its reorganisation over the past few years is starting to pay off.

The company said adjusted earnings per share were 66.7 pence in 2014, compared with an earlier guidance of 66 pence, and will advance to a range of 75 pence to 80 pence this year as previously forecast.

Pearson, which gets more than 90 per cent of its revenue from its education division, is reducing costs and expanding in online products as textbook sales are pressured by the popularity of book renting and Internet learning materials. Pearson’s reorganisation effort has included about 4,000 job cuts in the two years through 2014.

Pearson shares rose 0.1 per cent to 1,398 pence in early trading in London, taking the advance to 17 per cent this year.

In 2015, Pearson is returning to more normal levels of restructuring expenditure, it said. Sales fell 3.8 per cent to £4.87 billion last year

. In North America, where the company gets about 60 per cent of its revenue, Pearson expects increases in online higher education and more stable college enrollments, while learning services will be broadly level.

1 Johnny Ronan loses out on €315m Dublin docklands deal
2 Ryanair and Aer Lingus to cut further flights from regional airports
3 How long can Government afford to keep State pension age at 66?
4 Pre-flight Covid tests possible ‘within days’ if Government gives go ahead - airports
5 How much state pension will I get next year?
6 Bank of Ireland takes €169m charge for 1,700 job cuts
7 Meath site primed for delivery of enterprise and employment
8 Liquidators appointed to Irish arm of Wirecard
9 Brexit to curb services trade with UK, accountants group warns
10 Am I crazy to consider switching to an Ulster Bank mortgage?
Real news has value SUBSCRIBE