Digital detox is hard to do for most Irish people, research finds

Brands should be cautious about crashing the social media party, MediaCom study says 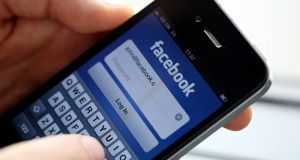 The most popular network for frequent use among Irish users surveyed was Facebook, with 69 per cent using it daily, according to Mediacom’s ‘Connected Ireland’ report. Photograph: Chris Ratcliffe/Bloomberg

“Digital detox” is more theory than reality for most Irish people, a new study of online habits by MediaCom Ireland shows. Three out of five people surveyed on behalf of the media-buying agency have not stayed offline for more than a single day.

Some 45 per cent of people said they were able to stay offline for only that long, while 15 per cent said they had never stayed offline.

Three-quarters of Irish people use social media at least once a day, according to MediaCom’s Connected Ireland report, with almost half (48 per cent) using it multiple times a day.

The most popular network for frequent use was Facebook, with 69 per cent of people using it daily, while WhatsApp was in second place at 36 per cent, ahead of Facebook Messenger (30 per cent), Twitter (22 per cent), Snapchat (16 per cent) and Instagram (15 per cent).

While 42 per cent said they followed brands or companies that interest them on social media, the MediaCom report suggests it would be a mistake for brands to bombard people any more often than “every few days”.

“We know that Irish people have embraced social media like Facebook, Twitter and Snapchat at incredibly high usage levels,” said MediaCom Ireland chief executive Peter McPartlin. “They have done so because they originally saw these new platforms as ‘their media’ – not something owned by the establishment but rather ones where they could interact with their friends, family or people like them.”

Naturally, brands and their agencies have followed the audience and piled in with substantial marketing investment, and MediaCom wanted to explore whether Irish social users were pushing back on this.

“It was probably no great surprise that more than 60 per cent said that ads on social media really annoy them, while half claim that they use ad-blockers when browsing online,” said McPartlin.

Consumers also display a natural “what’s in it for me” mindset when following brands on social media, prioritising special offers over an inate interest in “interacting” with the brand, the research confirmed.

Only 29 per cent of respondents said they preferred social media content from brands and companies to traditional paid advertising.

The 1,001 people surveyed by iReach on behalf of MediaCom were also asked whether they waited for an ad break before going online while watching television. Only 9 per cent said that they did so.

Only 16 per cent of people, meanwhile, admitted to using social media “to get likes, retweets or shares” of their posts.