Christmas 2014 will be seen as ‘a landmark’ for buying online, Wolfgang Digital study concludes 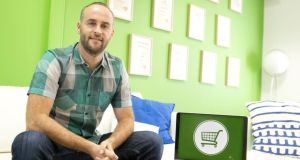 Alan Coleman: The sturdy desktop still “punches above its weight” when it comes to purchases

Mobile and tablet now account for 45 per cent of ecommerce-related traffic, while desktop (including laptops) accounts for 55 per cent (down from two-thirds in 2013), according to Wolfgang Digital’s study of activity in 2014.

However, consumers tend to use their “mobile moments” to research their next purchase before sealing the deal on a desktop, it adds. Three-quarters of transactions still happen on desktop.

Irish consumers are spending more time and more money online overall, with traffic to the ecommerce sites included in the study rising 31 per cent last year and spending on those sites up 41 per cent.

Coleman says Christmas 2014 will be seen as “a landmark Christmas” for online retailers in Ireland, with revenues ramping up 86 per cent year-on-year. Boosted by the adoption of the US retail phenomenon “Black Friday”, the fourth quarter was the stand-out quarter of the year, recording the highest rate of growth compared to 2013.

Wolfgang’s analysis is based on the traffic and revenue of websites in the retail, travel and charity sectors that have combined revenue of more than €80 million, or about 2 per cent of Ireland’s €4 billion ecommerce sector. Its study will be expanded to include travel, finance and utility companies in 2015.

The findings confirm that Irish consumers have emerged from the recession with new shopping habits embedded, says Coleman, while businesses are also becoming more sophisticated in how they communicate with consumers online.