We’ve got the brains, you’ve got the looks - let’s make lots of money 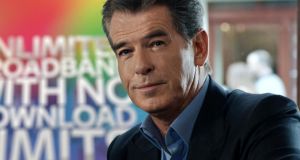 Just because George Clooney does it (for Nespresso), doesn’t make it right. Celebrity-fronted ads just seem that little bit more tragic ever since convicted fraudster Bernard Madoff made off with Kevin Bacon’s bacon and prompted the actor to lend his face to shiny television spots for telecoms giant Everything Everywhere. It’s hard out there for A-listers. No, really – it’s tough. Here are five of 2013’s notable unions between stars and brands.


Audrey Hepburn and Galaxy
The fair lady was brought back from the dead via the grim power of CGI to scoff chocolate in an ad for the Mars-owned Galaxy brand. “It perfectly captures our mother’s playful spirit,” claimed sons Sean Ferrer and Luca Dotti. Audrey Hepburn’s feelings about being exploited in this manner sadly must remain unknown. But it seems significant that – so far, at least – no one has dared try this malarkey on with the ghost of Katharine Hepburn.


Pierce Brosnan and Sky Ireland
The actor put in a typically tongue-in-cheek performance in two ads for Sky Ireland as part of its €10 million broadband marketing push. Remington Steele himself signed autographs and posed for photographs during an April shoot in Dublin city centre and Dalkey. Brosnan’s post-Bond career is actually going better than this endorsement suggests and actually, according to Sky, he “was just really keen to do something in Ireland”. Filmmakers, take note.


Helena Bonham Carter and M&S
As the “Middle England” retailer struggled with its clothing sales, it recruited the charms of Academy Award nominated Bonham Carter to play a Wizard of Oz-style character in a fairytale land. Not everyone liked it. “Marks +spencer advert must have cost millions to make, the bottom line is you don’t know what it is about. Arty farty marketing manager!” tweeted Alan Sugar. Oh, Alan. It’s about “Magic & Sparkle”, of course.


Andy Murray and Adidas
Adidas was blessed with a great narrative when Andy Murray won Wimbledon in July, ending a 77-year-wait for a British male singles champion. “Wimbledone” read its simple post-victory social media ad as it basked in the triumph. But the sportswear brand’s follow-up , “Personality” with “not bad for a man with no” in smaller font above it – tweeted in the wake of Murray’s BBC Sports Personality of the Year win – seems more double fault than ace.


Robert Downey Jr and HTC
The Iron Man star is the highest-paid actor in the world, according to Forbes magazine, earning $75 million in the year to the end of June. But he still found time to supplement his income by promoting HTC phones in a two-year contract thought to be worth $12 million. Not bad for a man whose drug convictions meant Hollywood once deemed him uninsurable. “Here’s to change,” as the campaign put it.

1 Who are Ireland’s 17 billionaires?
2 Why has the pension age question suddenly become an election issue?
3 Ireland has fifth-largest number of billionaires per capita in the world, says Oxfam
4 Property firm sues engineering company over waterproofing of basement
5 Insolvency arrangement approved for man with €60 million in debts
6 Ryanair suing Skyscanner for allegedly selling flights through its domain
7 Restoring pension age to 65 would cost €620m a year, claims FF
8 Help, I’ve no PRSI stamps – can I still get a pension?
9 When I’m 65: five ways you’ll benefit
10 Single, married or cohabiting: Who pays the least tax?
Real news has value SUBSCRIBE