US stocks surge as investors shake off China fears 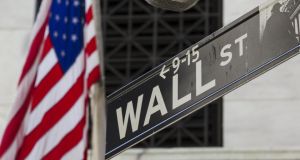 Stocks surged late in trading, appearing to respond to the view of William Dudley, president of the Federal Reserve Bank of New York, that next month may be not be the right time to start increasing rates.

US stocks yesterday wiped out most losses suffered in a two-day rout, with shares posting their biggest gains since 2011 as investors shook off concerns that China’s slowdown would hurt the American economy. The Dow Jones industrial average climbed 619 points, or almost 4 per cent to 16,285, bringing to a close six days of losses sparked by fears that China’s troubles might be more severe than expected.

The S&P 500 climbed 3.9 per cent and the Nasdaq surged 4.2 per cent, posting its best day since August 2011, as investors were buoyed by positive data about the US economy and expectations that the Federal Reserve may delay ending its near-zero interest-rate policy.

Stocks surged late in trading, appearing to respond to the view of William Dudley, president of the Federal Reserve Bank of New York, that next month may not be the right time to start increasing rates.

The Federal Reserve had indicated in July meetings of the Federal Open Market Committee, the central bank panel that sets monetary policy, that the conditions to begin hiking borrowing rates was approaching. This had stirred a belief in the markets that there were would be a rate hike when the committee meets in mid-September.

Worries about the sharp slowdown in China, which have rocked global markets in the past week, have raised concerns about the effect of a rise in US interest rates on the rattled emerging market economies. “From my perspective, at this moment, the decision to begin the normalisation process at the September FOMC meeting seems less compelling to me than it was a few weeks ago,” Mr Dudley said.

He noted that international developments “do have relevance” for the US economic outlook, echoing the view in the market this week that the Fed will hold off on raising rates for the first time in almost a decade because of the financial markets turbulence.

Investors will be watching for further indications of the Fed’s intentions at its annual policy conference which begins in the mountain resort of Jackson Hole in Wyoming today.

The US Commerce Department said, meanwhile, that orders of durable goods rose 2 per cent in July, a signal to the market that the American economy may be able to withstand any contagion from China’s economic woes. European stocks did not perform as strongly yesterday as their US counterparts, having enjoyed a rebound of 4 per cent on Tuesday, a day when American share prices fell again after Monday’s chaotic trading, despite China cutting rates in a bid to calm markets. In Asia, some markets ended in positive territory, though the main Shanghai Stock Exchange Composite Index darkened further into the red, ending the day 1.3 per cent lower after a volatile day of trading.

Share prices in Europe moved up off lows hit during trading as investors remained cautious after further declines in Chinese stocks. The Iseq outperformed other European markets helped by a strong increase in bookmaker Paddy Power. – (Additional reporting: The Financial Times )