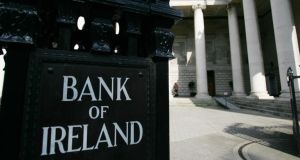 Bank of Ireland rose 4.2 per cent, on the back of hopes red tape around the sector might ease. Photograph: Bryan O’Brien

Global stocks joined declines in bonds and commodities as a sell-off in emerging markets deepened with traders parsing the implications of a Donald Trump presidency for the world’s largest economy.

In the United States, stocks fluctuated in whipsaw trading with the Dow Jones Industrial Average spinning near a record, as investors speculate how Mr Trump’s policies will impact the economy and interest rates. Small caps headed for the best weekly gain in five years.

CRH, which surged earlier this week on expectations of an infrastructural spending splurge by Mr Trump, fell back by 1.2 per cent to close at €31.96. Traders attributed the fallback to profit-taking by investors following its post-election bounce.

Cavan insulation group Kingspan also fell back after a Trump bounce earlier in the week, finishing the session down more than 5 per cent. Traders suggested “lumpy” bulk selling orders were to blame.

Bank of Ireland rose 4.2 per cent, the continuation of a good run on the back of hopes that red tape around the banking sector might ease.

The Iseq overall fell be about 0.2 per cent.

Barclays rose 0.3 per cent or 0.65p to 201.75p after the bank completed the sale of its £1.2 billion Spanish and Portuguese credit card business to Spanish online bank WiZink.

Barclays has been working to sell down and dispose of its hinterland business as quickly as possible in order to focus on core US and UK operations.

Away from the top tier index, FTSE 250 building materials firm SIG closed lower by 21.9 per cent, or 25.3p to 90.5p, after news that chief executive Stuart Mitchell would be stepping down.

The announcement came as the company issued a profit warning, following increased competition and a slowdown in activity in the wake of the Brexit vote.

The Stoxx 600 Banks Index fell 0.2 per cent, after surging 7.8 per cent in the past four days on bets higher inflation will improve profitability and financial rules will ease.

Deutsche Bank tempered the drop, up 4.6 per cent, as Barclays said European lenders may reach faster, cheaper settlements with the US Department of Justice after Mr Trump’s win.

Carmakers were the biggest advancers after Mr Trump selected a prominent critic of global warming to lead his environment agency’s transition team.

Fiat Chrysler Automobiles, which gets most of its revenue from the Americas, rose 5.6 per cent. BMW and Volkswagen added at least 2.4 per cent.

PostNL slid 5.1 per cent after it rejected a €2.5 billion approach from Bpost, saying the proposal’s value is too low and potentially puts the Dutch company under Belgian government control.

A 2.3 per cent slide in crude weighed on energy shares heading into Friday afternoon, making them the worst-performing group in the S&P 500.

Materials producers also retreated as gold and silver plunged. Expectations for higher inflation that have sparked a bond rout make precious metals vulnerable as a store of value.

Walt Disney climbed 2.1 per cent after predicting renewed growth next year and beyond even as fourth-quarter profit fell short of estimates.

Nvidia Corp surged 13 per cent after the biggest maker of graphics chips used by computer gamers forecast quarterly sales that signalled continued strong demand for its signature products and gains in new markets such as data centres.

1 Player Wills site: Hines and APG to seek permission for 416 homes
2 EU divisions laid bare by ‘frugal four’ Covid recovery proposal
3 Pricewatch: Coronavirus has given us four categories of shopper
4 Eir sells mobile mast infrastructure company for €300m
5 Several jobs saved after sale of office supplier Spicers Ireland
6 Economies can be restarted if bold and imaginative choices are made
7 Bayer reaches agreement in 125,000 US cancer lawsuits
8 Dawn Meats reopens plant supplying McDonalds burgers
9 Pilita Clark: A lot of us are losing it in lockdown – but we really shouldn’t
10 Reopening economy does not cause coronavirus spike – researchers
Real news has value SUBSCRIBE