Stocks bounce back on earnings reports 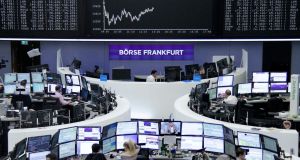 Traders in the stock exchange in Frankfurt. Zalando and Carrefour led the region’s retailers higher after the German online company raised its profitability forecast and the French grocer reported sales that beat projections. Photograph: Reuters

US stocks were on track for a second straight advance on Wednesday, as a climb in oil prices buoyed the energy sector and earnings from Morgan Stanley helped lift financials.

Cidermaker C&C was among the top performers, up 2.3 per cent, ahead of its interim management statement next week. The spike in its shares followed a report in The Irish Times that renowned US value investor Charles Brandes had almost doubled his stake in the business to above 6 per cent.

Tullow Oil, which maintains its primary listing in London but is also traded in Dublin, rebounded by more than 3 per cent to close at €3.24, on the back of stiffening oil prices.

Kenmare Resources fell back by more than 6 per cent, wiping out recent gains. Insurer FBD was also off by close to 4 per cent, as the general insurance sector continues to struggle, blaming high compensation awards.

Tesco, Wm Morrison Supermarkets and Next rose more than 2.7 per cent as European retailers climbed the most among industry groups.

Burberry Group rose 4.2 per cent, rebounding from its biggest slump in a year. Foxtons Group gained 2.9 per cent after saying it expects full-year revenue to be in line with market expectations.

Housebuilders Persimmon and Taylor Wimpey climbed more than 2.5 per cent.

Among the stocks sliding on Wednesday, Reckitt Benckiser Group dropped 2.6 per cent after its sales missed estimates. Travis Perkins lost 4.4 per cent after saying it sees annual adjusted profit below consensus.

Laird slumped a record 49 per cent after the supplier of parts to Apple pared its earnings outlook. Software company Imagination Technologies Group dropped 6.3 per cent, the most since July.

Accor advanced 5 per cent, the most since June, after Europe’s largest hotel operator posted an increase third-quarter sales.

Svenska Handelsbanken slid 1.6 per cent after its chief executive officer said that its regulatory capital equivalent of almost one quarter of risk-adjusted assets might not be enough to deal with future requirements.

The energy sector jumped 2 per cent, the most in three weeks, with a 5.2 per cent rise in Halliburton also providing a boost after the world’s No 2 oilfield services provider posted third-quarter results.

Morgan Stanley gained 1.8 per cent after posting a better-than-expected quarterly profit to round out a string of solid results from big US banks. The financial sector has risen in three of the past four sessions for a 1.8 per cent advance.

A disappointing revenue forecast from Intel capped the advance on Wall Street, however. The chipmaker tumbled 6.1 per cent as the biggest drag on each of the three major indexes. The PHLX semiconductor index shed 0.45 per cent. – (Additional reporting: Bloomberg/Reuters)