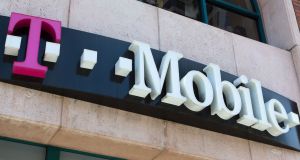 European telecoms stocks rose on Tuesday following reports that T-mobile US and Sprint were in merger talks. Photograph: Justin Lane/EPA

This was little movement in world stocks on Tuesday as investors await news from the US Federal Reserve policy meeting. Along with the rest of Europe, Ireland’s benchmark index closed up slightly, while Smurfit Kappa closed at the top of the elite Iseq 20 index.

After a tumultuous few days, shares in Ryanair moved back toward the level they were at prior to the saga surrounding the company’s pilot rostering practices. The low-cost airline closed up by 1.19 per cent at €16.939. It’s not clear whether investors were shrugging off the news flow which suggested that the company’s pilots may take to strike action or whether the airline simply followed its European peers Lufthansa, EasyJet and IAG which all closed up.

Heavy trading volumes were seen again today in some of the Irish listed real estate investment trusts (REITs). With between seven and eight million shares traded in Hibernia REIT and Green REIT, the property companies closed up by 1.07 and 0.36 per cent respectively.

Paddy Power Betfair performed poorly despite news that asset manager Blackrock had increased its stake in the company. The bookie closed down by 0.23 per cent at €80.88. In the UK, however, it was 1.62 per cent ahead.

British share indices advanced on Tuesday as retail stocks gained and cyclical stocks joined in, with investors awaiting further signs of the direction of monetary policy.

Financials, which benefit when interest rates are raised, supported the FTSE, with HSBC and Lloyds both up around 1 per cent, but gains were muted overall.

Supermarkets Sainsbury’s, Morrisons, Tesco and Marks & Spencer, whose bricks-and-mortar business models have been squeezed by online delivery services like Ocado, were among top FTSE 100 gainers.

Sales data from Kantar showed inflation helped boost sales growth for the top supermarkets, with Tesco coming out on top although its market share was squeezed.

Online grocer Ocado tumbled 2 per cent, however, after its third-quarter results revealed rising short-term costs due to a ramp-up in capacity at its Andover distribution centre and investment in a new centre in Erith near London.

Telecoms stocks rose as much as 0.9 per cent to their highest level in nearly four weeks after CNBC reported that US wireless carriers T-Mobile US and Sprint were in active merger talks.

Deutsche Telekom, which controls T-Mobile US, was the biggest gainer, up more than 3 per cent, but other stocks in the sector were also boosted by the report.

Solvay fell 1.4 per cent but stayed close to its 2015 highs after news of the €1.6 billion sale of its polyamides business to BASF. Elsewhere, Heineken fell 4.4 per cent after Mexican bottler and retailer Femsa sold a €2.5 billion stake in the world’s second largest brewer.

US stocks were little changed on Tuesday as investors held back from making major bets ahead of the Federal Reserve’s policy meeting.

Shares of wireless carriers T-Mobile and Sprint rose following a report that the companies were in active merger talks.

Best Buy fell as much as 8.6 per cent after the US electronics retailer forecast 2021 adjusted earnings well below Wall Street estimates. The stock was the biggest loser on the consumer discretionary index.

Tesla was down after Jefferies started coverage of the electric car maker’s stock with “underperform”.