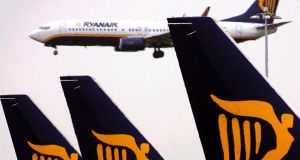 Ryanair: the low-cost carrier saw its shares fall 7 cent to €9.96, which was roughly in line with other airline stocks. Photograph: Andy Rain/EPA

Germany’s Dax set a new life-time high, the pan-European FTSEurofirst 300 and the broader STOXX 600 share indexes climbed to their highest level in more than seven years, and France’s Cac touched its highest level since mid-2008.

The STOXX Europe 600 Food and Beverages index advanced 2.2 per cent, the top sectoral gainer. The broader stock market also got some boost from a rally in mining shares.

DUBLIN The Iseq index underperformed its European counterparts but still managed to close 0.3 per cent up at 5,898.

The building materials group overturned a €215 million loss recorded in 2013 to report a pre-tax profit of €761 million last year.

CRH’s shares have now risen by 25 per cent since the start of the year.

The strongest performer of the day, however, was food group Aryzta, whose shares rose €1.70 or 2.4 per cent to €71 on the back of positive industry trends.

Food groups Kerry and Glanbia had another good day after reporting positive results this week, trading up 50 cent at €64.86 and 8 cent at €16.15 respectively.

Low-cost carrier Ryanair saw its shares fall 7 cents to €9.96, which was roughly in line with other airline stocks.

Rival Aer Lingus traded flat at €2.24 as speculation surrounding IAG’s bid for the airline continued. LONDON Royal Bank of Scotland dominated the London market after it posted its seventh consecutive year of losses and warned of substantial jobs cuts.

The Edinburgh-based company revealed a deficit of £3.5 billion – taking the running total since it was bailed out in 2008 to almost £50 billion.

Uncertainty over Greece’s debt mountain and the outlook for US interest rates hampered progress for much of the session but the FTSE 100 Index eventually finished 14.4 points higher at 6949.7.

Elsewhere in the banking sector, Standard Chartered was 5 per cent higher after it announced chief executive Peter Sands will stand down after eight years at the helm. With chairman John Peace also set to go next year, shareholders welcomed the changes as shares rose 49.7p to 976p.

Morrisons continued to do well in the FTSE 100 – up almost 2 per cent or 3.4p to 196.3p – following the supermarket’s appointment of former Tesco director David Potts yesterday. Tesco was also 5.1p higher at 246p, with Sainsbury’s climbing 3.4p to 275.1p.

The Stoxx Europe 600 Index advanced 1 per cent to 390.69 at the close of trading, the biggest gain in more than a month. Bayer added 3.7 per cent as it forecast an increase in 2015 sales. GDF Suez gained 1 per cent after saying it will cut costs and posting annual net income in line with estimates.

NEW YORK The Dow and S&P 500 edged lower initially as energy shares eased back with oil prices, while the Nasdaq advanced after deal news in the technology sector.

Avago Technologies jumped 13 per cent to $127.39 as the best performer on both the S&P 500 and Nasdaq 100 index after the company reached a deal to acquire Emulex for $8 per share. Emulex shares surged 25.8 percent to $8.