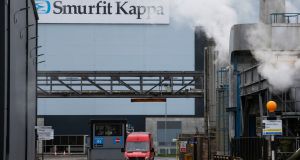 European shares advanced on Wednesday as investors pinned their hopes on a soft Brexit and the US finally reaching a trade deal with China.

The pan-European Stoxx 600 index rose by 1 per cent to its highest level in nearly eight months, while the Iseq index in Dublin advanced 1.8 per cent to 6,313.12.

“Theresa May’s decision to sit down for talks in a bid to find a solution to the Brexit impasse is potentially a big moment,” said Dermot O’Leary, an economist with Goodbody Stockbrokers.

Smurfit Kappa was also in demand, advancing 4.2 per cent to €27.06, as reports that US and Chinese officials are getting closer to a trade deal potentially bodes well for the global economy. Both countries imposed tariffs on billions of dollars’ worth of each others’ goods last year.

CRH gained 3.5 per cent to €29.21 after German brokerage Berenberg started coverage with a buy rating and a price target of €33 on the stock.

In London, the FTSE 250 bounced 1.2 per cent – its biggest rise in 2½ – for a fifth straight session of gains, while the FTSE 100 added 0.4 per cent and ended the session at its highest level since early October. But the exporter-heavy FTSE 100 lagged its European peers as the pound firmed.

Although the default remained that Britain would leave the European Union without a deal, Mrs May’s move to enter talks with Mr Corbyn offered the prospect of keeping the UK in a much closer economic relationship with the EU after Brexit than she had envisaged.

That boosted shares in housebuilders with blue-chips Persimmon, Taylor Wimpey and Barratt all rising between 2.4 per cent and 4.4 per cent. Britain’s big banks, including Royal Bank of Scotland, Lloyds and Barclays, also thrived.

However, exporters felt the brunt of a stronger pound.

Superdry’s shares fall almost 8 per cent after founder Julian Dunkerton forced his way back into the clothes company, sparking the exit of most of its board.

European chipmakers AMS, Siltronic and Infineon Technologies each rose at least 4.1 per cent, gaining along with their US peers, bolstered by optimism over US-China trade talks.

Healthcare stocks limited the broader benchmark’s gains as they dropped 0.4 per cent. Danish bioscience firm Chr Hansen fell 6.8 per cent to lead losses on the sector index after its second-quarter results failed to impress investors.

German media group Prosiebensat 1 Media climbed 5.6 per cent, with the chairman of Mediaset saying the Italian broadcaster was still studying a possible cross-border deal. Mediaset ended the day up 3.1 per cent.

US stocks were ahead in midafternoon trading on Wall Street, extending a strong start to the quarter as rising hopes of a US trade deal with Beijing and bullish reports lifted the semiconductor index to a record high.

Advanced Micro Devices and Intel surged after Nomura Instinet started coverage of both the stocks with buy ratings.

Chip stocks, which are heavily reliant on China for their revenue, have surged more than 27 per cent this year on optimism about trade and recovering demand for chips.