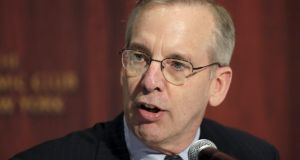 William C. Dudley, president and chief executive officer of the Federal Reserve Bank of New York said on Wednesday that a Federal Reserve interest rate hike next month seems less appropriate given the recent global market turmoil has increased the risks to the US economy. (Photograph: Eduardo Munoz/Reuters)

Britain’s top share index rose on Thursday, recouping the previous session’s fall, as hopes of lower rates for longer from the Federal Reserve helped spur markets which had been rocked by concerns over Chinese growth. Britain’s FTSE 100 was up 117.04 points, or 2 per cent, at 6,096.24 by 0734 GMT, shadowing gains made on Wall Street and in Chinese stocks.

Federal Reserve official William Dudley said that an interest rate hike next month seems less appropriate given the threat posed to the US economy by recent market turmoil.

That turmoil has sent Britain’s FTSE 100 down over 9 per cent so far in August, set for its biggest monthly loss since October 2008. It fell 1.7 per cent in the previous session.

However, some investors said that if the concern over volatility in China delayed rate rises from the Fed, then the benefits for global growth from continued easy monetary policy could outweigh the costs of market falls now. “I believe the events of this week will prove to serve the global economy well in a wider context. This is because the Federal Reserve... (is) now less likely to raise interest rates this year,” said Nigel Green, CEO of deVere Group, in a note. “Raising rates could have a host of dangerous consequences... the Fed now (has) time to evaluate if an imminent interest rate rise is necessary.”

All but one FTSE 100 stock was in positive territory, with China-sensitive stocks such as miners and UK-listed Asian banks among those adding the most points to gains.

Top individual riser was CRH, up 4.8 per cent after the Irish building materials company reported a rise in earnings and revenues. It also bought US glazing products manufacturer CR Laurence for total consideration of $1.3 bln, in a deal one broker described as sensible.

Miners rose 3.1 per cent as copper rallied, buoyed by the stock market rally in China, which is the world’s largest consumer of metals.