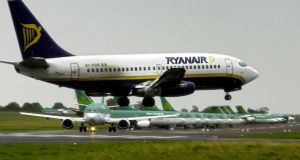 Investors have been buying Ryanair since Monday, when it announced a third-quarter loss that was in line with predictions, and signalled that a strategic shift commenced in September is beginning to find favour with travellers. Photograph: Eric Luke

Despite a period of misery, stretching back to January 22nd, that knocked 5.5 per cent of the benchmark Stoxx 600 index, analysts were optimistic European markets are set to make further ground this year.

Banks and healthcare companies were among the biggest climbers yesterday.

DUBLIN
The Iseq gained ground despite poor performances from some of its leading stocks.

Ryanair put in its third strong performance in as many days, gaining 3.48 per cent to close at €7.04. Investors have been buying the airline since Monday, when it announced a third-quarter loss that was in line with predictions, and signalled that a strategic shift commenced in September is beginning to find favour with travellers.

LONDON
Pharmaceuticals and household goods giant, GlaxoSmithKline, added 1.6 per cent to 1,579.5 pence after saying revenue will rise 2 per cent and earnings per share, excluding currency swings and some items will increase by 4 per cent to 8 per cent in 2014.

Hargreaves Lansdown tumbled 10 per cent to 1,345 pence. Operating-profit margin in the six months ended December 31st fell 49 basis points to 65.15 per cent, according to a statement. The brokerage announced a payout of seven pence per share, trailing the Bloomberg dividend estimate of 7.3 pence.

Handelsbanken advanced 3 per cent to 318.40 kronor, its biggest increase since October 22nd. The Swedish lender proposed a total dividend of 16.50 kronor per share, comprising a special dividend of 5 kronor and a regular dividend of 11.50 kronor.

ING Groep added 2.3 per cent to €9.95. Credit Suisse added the Dutch lender to its European focus list, citing the stock’s recent decline and suggested that it may announce new targets and dividend policies at its investor meeting next month.

Alfa Laval AB gained 4.6 per cent to 162.80 kronor, its biggest advance in one year. The largest maker of heat exchangers posted fourth-quarter order intake of 8.17 billion kronor, compared with 7.45 billion kronor in the third quarter. Commerzbank said in a note the order intake beat analysts’ estimates for the first time since the second quarter of 2012.

Syngenta lost 3.4 per cent to 306.20 francs after the biggest maker of crop chemicals reported full-year net income of $1.64 billion and sales of $14.7 billion. That missed estimates for profit of $1.7 billion and revenue of $14.9 billion.