Apartments or more shops for Dundrum? Owners consider next step 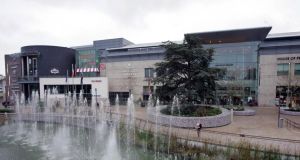 Dundrum Town Centre’s new owners “will really ramp up our thinking in the next month” on what to do with the adjacent six-acre site, said Simon Betty of Hammerson. Photograph: Matt Kavanagh

Dundrum Town Centre’s new owners may ultimately sell an adjoining six acres or enter a joint venture to develop the site as it is increasingly likely that existing plans for more retail space will be scrapped in favour of an apartments-led scheme.

Simon Betty, head of the Irish operation of UK property company Hammerson, which took joint ownership of the centre in July with German insurer Allianz, said the new owners “will really ramp up our thinking in the next month” on what to do with the plot.

Planning permission was previously granted for a 110,000sq m retail, dining and leisure facilities development on the site, which covers the old Dundrum shopping centre, though this would need to be renewed. Retail properties on the property are currently on short-term leases.

“When I moved to Dublin in January [from the UK], I was really quite surprised at the housing crisis here. The more time I spend here, the more attractive I see that site as a residential location,” Mr Betty told The Irish Times, noting the site’s proximity to the Luas tram line and M50 motorway.

While Hammerson, which is the Dundrum asset and development manager in the arrangement with Allianz, has not yet to really engage with planners, it sees the site being developed for mixed use, mainly residential units. It may also include a hotel as well as some retail and catering space, Mr Betty said.

“Residential development is not really our core business, so it would more likely be done in partnership,” said Mr Betty. “Selling it, joint venturing it or partnership – all of these things are under consideration.”

The €1.85 billion loan purchase, from the National Asset Management Agency, also included borrowings linked to 50 per cent stakes in the Ilac and Pavilions shopping centres in Dublin.

Hammerson and Allianz secured control of the Dundrum assets in July as part of a consensual arrangement with Mr O’Reilly. Hammerson is also on track to take control of Chartered Land’s stakes in the Ilac and Pavilions by the year end.

These assets include a 16-acre site beside the Pavilions in Swords and a prime five-acre plot called Dublin Central, stretching from O’Connell Street to Moore Street.

1 Columbia Sportswear defies gloom with first Irish standalone shop
2 Could your old car be giving away all your secrets to its new owner?
3 Nine more suing INM and Leslie Buckley over alleged data hacking
4 Why are markets booming when a crash is on the way?
5 ‘The rental situation stops me moving back home’
6 Restaurants file court actions against insurers over lockdown losses
7 How to further divide the economy using the wage subsidy
8 Home or car: what’s the best use of my savings?
9 High Court appoints interim examiner to Compu b parent company
10 Second Covid-19 outbreak and no-deal Brexit an appalling vista
Real news has value SUBSCRIBE