Top business duo set to profit if One51 flotation proceeds 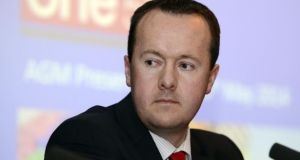 One51 chief executive Alan Walsh: 2015 a year of significant progress with One51’s entry into the north American plastics markets through the IPL deal. Photograph: The Irish Times

Businessmen Dermot Desmond, Larry Goodman and a number of co-ops are poised to benefit if manufacturer and waste manager One51 goes ahead with plans to launch on the stock market.

One51 plans to ask shareholders at a meeting next month to support a series of resolutions that will allow it to offer its shares for sale on the Irish and London stock exchanges.

The company signalled that it is considering the initial public offering (IPO) at the same time that it published results showing it earned €18.4 million in profits last year on sales of €366 million.

Mr Desmond’s International Investment & Underwriting (IIU) is One51’s biggest shareholder with 20.8 per cent of the group, a holding that was worth just under €54 million yesterday.

IIU last year spent €36 million, €1.85 a-share, buying out fellow shareholder Pageant Holdings’s 12 per cent stake in the group. Yesterday, One51’s shares were worth €1.65 on the informal “grey market” where they currently trade.

Any IPO would require these shareholders’ support.

None of them commented on the IPO proposal, but a circular from chairman Denis Cregan indicates that shareholders believe this is the best way of getting value from their investment. He states that the board acknowledges “views that a stock exchange listing would better recognise and allow for the realisation of value by shareholders”.

The company is unlikely to price the offer until close to an actual stock market listing. Its shares traded as high as €1.85 on the grey market last year during the period when IIU bought out Pageant.

That deal followed contacts from private equity fund, Capvest, signalling that it was willing to pay €1.80 a-share for the group, although a formal offer never materialised.

At the time analysts speculated that the group’s shares could be worth closer to €2. Caisse de dépôt et placement du Québec (CDPQ), a fund manager and minority shareholder in IPL, the Canadian plastics manufacturer in which One51 took a two-thirds stake last year, has provisionally agreed to buy €20 million worth of shares in the Irish group should it list on the stock market.

One51 has agreed to give both CDPQ and IPL’s other minority shareholder, development fund, FSTQ, shares in the company in return for their stakes in the plastics manufacturer.

The group has called an extraordinary general meeting (egm) for April 21st in Dublin at which it will formally ask shareholders to vote for the IPO. The resolutions include one allowing One51 to increase its authorised share capital by 150 million shares.

They will also be asked to approve a long-term incentive plan for its executives that would replace the existing plan agreed by shareholders two years ago.

Once-off charges that included costs of the IPL meant profits last year fell 10 per cent to €18.4 million from €20.6 million in 2014. However, the group’s operating surplus before exceptional charges was up 14 per cent at €16.5 million. Its share of profits from investments almost trebled to €24.2 million.

Chief executive Alan Walsh said 2015 had been a year of significant progress with One51’s entry into the North American plastics markets through the IPL deal. Last year, it also received €51.8 million from its holding in Atlas Investments, (formerly NTR).