One51 to consider flotation within next two years 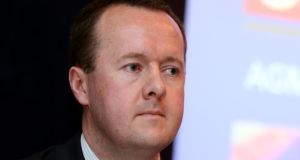 Alan Walsh at yesterday’s AGM: he said the company would only be in a position to float once it was able to fully concentrate on its plastics and waste divisions.Photograph: Jason Clarke Photography

ould consider a flotation of the business within two years.

Alan Walsh, the chief executive brought in three years ago to oversee a restructuring of the group, said One51 first needed to offload its various outside investments, which included a 23 per cent stake in the wind energy outfit NTR.

Mr Walsh, who was speaking following One51’s annual shareholders’ meeting in Dublin, said the company would only be in a position to float once it was able to fully concentrate on its plastics and waste divisions.

One51 is structured into three divisions: plastics, its environmental waste operation ClearCircle, and its investment holdings arm, which holds its stake in NTR, a 13.7 per cent share of Pioneer Green Energy in the US, and a 4.3 per cent stake in the tidal energy company OpenHydro.

“If we had a structure of just two wholly owned [operating divisions], a flotation would be achievable,” said Mr Walsh.

He added that because One51 does not own controlling stakes in its outside investments, it would be too risky for shareholders to bring the company to the stock market while so much of its value was under the control of other businesses.

“Ultimately we have no control over NTR, and it’s a big chunk of the value. We need to get to two divisions first. Then we could certainly go there [a flotation].”

‘Stabilisation’ phase Mr Walsh told shareholders the “stabilisation” phase of its strategy, which involved the paydown of more than €100 million in debt and the sale of non-core assets such as Irish Pride bakery, was over.

“The focus has shifted from stability to growing shareholder value,” he said.

The company is mulling a rebrand of its plastics division, and it is also looking to raise well in excess of €20 million in fresh funding for acquisitions.

“We are looking at acquiring in the food packaging space. About 50 per cent of One51 is owned by co-ops, and they also need food packaging,” Mr Walsh said.

One51, which had sales last year of €301 million and profits of €7 million, has agreed to pay £10.7 million for the UK plastics company Straight Plc.

5 When will we travel again? Nobody knows

9 GameStop focus of war between Wall St and small investors