Registrations of new Tesla cars plunged 46% in January from December 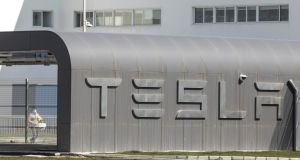 Tesla shares fell after China registration data indicated a significant sequential slowdown in demand before the electric-car maker started feeling the brunt of any impact from the coronavirus.

Registrations of new Tesla cars plunged 46 per cent to 3,563 in January from December, according to state-backed China Automotive Information Net, which gathers industry data based on insurance purchases. Of the January registrations, 2,605 were for cars built in China.

While Tesla had bucked the trend in China’s waning electric-car market in the previous two months, the January drop shows that the US brand isn’t immune to challenges the broader industry is facing. China’s car market probably is headed for a third straight annual decline as the coronavirus outbreak exacerbates a slump started by an economic slowdown and trade tensions.

Tesla shares dropped as much as 6.8 per cent shortly after the start of regular trading. The stock had soared 86 per cent this year through the close Wednesday, partly driven by optimism about the company starting to produce Model 3 sedans at a newly built plant near Shanghai. – Bloomberg

1 The wealth of the Irish – how do your assets match up?
2 Irish company to test vaccines on volunteers deliberately infected with Covid-19
3 KBC Ireland fined €18.3m for ‘unconscionable’ tracker scandal role
4 Dunnes Stores set to enter grocery delivery market
5 Will Facebook walk away from European market after data protection 'hissy fit'?
6 Air travel never going ‘back to way it was’
7 How to upgrade your home entertainment system for less
8 Should I switch bank now with Ulster Bank at risk of closing?
9 Irish Fairy Door Company moves to licensing model
10 Dublin and Cork airports look at setting up pre-flight Covid testing centres
Real news has value SUBSCRIBE