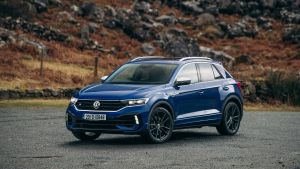 The T-Roc R: it asks you to throw away the heritage of the Golf in favour of a non-descript suburban runaround

After weeks of testing battery cars it’s nice to drive something with old-fashioned T-Rex in the tank. And this is no ordinary VW T-Roc. This one roars.

What we have here is the coming together of engineering prowess and marketing Powerpoint. Volkswagen has pedigree in building fantastic hot hatches, from the legendary GTIs through to the hardcore R versions of the Golf. Meanwhile, the world and its mother has gone crossover mad. So some bright spark in Germany came up with the recipe of adding a capital R to the T-Roc range.

It’s more than just a letter, after all. And it’s relatively easy to do (says the motoring hack shouting from the pitlane). After all, the T-Roc is effectively a Golf in crossover clothing.

The underpinnings is the acclaimed MQB platform that won the Golf various awards in recent years for its handling prowess. And the T-Roc shares the engine range with the hatchback sibling as well, so for this version we get the lovely rasp of the same 2-litre turbocharged petrol engine mated with the silky smooth seven-speed DSG auto transmission that powers the Golf R. You even get that Golf’s 4Motion all-wheel drive system. In T-Roc guise that means 300bhp and a 0-100km/h time in 4.8 seconds.

With those sort of stats it shouldn’t matter that the T-Roc is dressed up with all the menace of a suburban accountant. And yet despite retaining the throaty rasp of the Golf R, by hoisting it up in the air and softening its look, VW has lost a little of the hatch version’s magic. If you didn’t know it was a 330bhp R version, you would be hard pushed to tell from the looks.

That said, the T-Roc R boasts all the comfort, refinement and driving ability of the hatch. It’s only when you spend time away from the VW range that you realise how well the Germans put their cars together.

The handling feels a smidgen less sharp than we remember from the Golf. On the upside it does seem to soak up the Irish bumps better than the harsher riding Golf R.

The T-Roc mixes fun and pace well, and it might seem to offer a power option to those determined to buy a little crossover. But that begs the obvious question: why?

I can accept the market trend towards mid-sized crossovers over family saloons. I can even get the idea of a smaller one if it’s got a little character in its styling. I don’t get the idea of a hot crossover that’s more expensive than the better looking and more driver-orientated hot hatch, which has heritage and head-turning appeal.

The T-Roc R is fun, fast, but too expensive when you consider that it’s actually asking you to throw away the heritage of the Golf in favour of a non-descript suburban runaround. Not if I’m going to be forking out €750 a year in motor tax as well.

I’d definitely recommend a R-rated VW, but it would be a hot hatch version, not a corporate-derived crossover.

A surgery attached to a house is adding €27k to the stamp duty, what can we do?
4