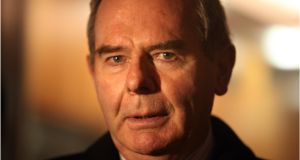 The announcement this week that Seán Quinn had parted ways with the owners of the manufacturing businesses on his old family farm in Derrylin, Co Fermanagh, is yet another setback of the former billionaire’s own making, according to a source with knowledge of events of the past three years.

In a three-paragraph statement accompanying a longer one from QBRC Ltd (formerly Quinn Business Retention Company), the 69-year-old Quinn said he had agreed to stand aside from his contract with the businesses to facilitate a process that “creates a pathway for the Quinn family to potentially realise its ambitions over time”.

But there is no way back for Quinn snr, according to the source, who said the man once considered Ireland’s richest had no hope of restoring relations with key executives such as Liam McCaffrey and Kevin Lunney, men with whom he built up the Quinn Group over the years.

Quinn had a €500,000 a year consultancy contract with the manufacturing group while his son, Seán jnr, had a €100,000-a-year deal. Both deals were put in place immediately after QBRC took control of the businesses from Aventas in late 2014, but are now cancelled.

As well as giving the new owners access to Quinn’s experience of creating and running the businesses, the contracts were also seen as a way of cooling emotions in what has often been a fraught atmosphere in the area since the April 2011 seizure by the former Anglo Irish Bank of the Quinn Group.

According to a source involved in dealings with Quinn over the past three years, when the businessman returned to his old offices in the Derrylin offices, he believed he would quickly, and cheaply, retake control of the profitable enterprises.

QBRC had been established by local business figures to save local jobs and end the campaign of intimidation and vandalism that had followed the businesses being taken over by Anglo and rebranded as Aventas.

At first Quinn believed a political solution to the loss of the group could be achieved and sought to use local Fine Gael councillor John McCartin as a way of getting to Taoiseach Enda Kenny and Minister for Finance Michael Noonan.

However, it was explained to him that the real power in the situation belonged not to the State, by way of the nationalised Anglo, but with the 43 US institutions that had invested in Quinn Group bonds.

In time McCartin and some other local figures, working with former Quinn Group executives such as McCaffrey, began to negotiate with Aventas about a possible deal that would see the businesses revert to local control.

Talk of such a deal led to a lessening of tensions locally, but in hindsight these figures suspect that the real objective for Aventas was to calm emotions, rather than reach a deal with QBRC, while secretly negotiating sales with other parties.

However, when a deal with Lagan Cement for the sale of the former Quinn tiles business was announced, there was an immediate campaign of intimidation launched. When the Lagan chairman received a death threat in the post on the same day that his wife died, the deal was called off.

A key meeting took place in the Mayfair Hotel in London between McCaffrey, McCartin and representatives of three funds that between them owned 56 per cent of the debt.

The investors could see the logic of returning the group to the old Quinn Group management control, but had a key demand. The two Irish men thought it would be price, but it turned out instead that the Americans wanted to be QBRC’s bankers. It was a done deal.

A decision to sell the glass manufacturing part of the group to a party other than QBRC meant the Americans got some of their money back, while taking a punt on the old management in relation to the rest of the business.

McCartin went to see Quinn to get his approval for the deal. The former owner agreed, but said he wanted to buy the glass business. In December 2014, when Aventas announced that the glass business was being sold to a Spanish group, Vidrala, for €400 million, McCartin met its owner, Carlos Delclaux, in the Conrad Hotel in Dublin and told him of Quinn’s interest. The Spaniard said he would hold off. However, the Quinn deal never materialised and the Vidrala deal went ahead.

The main figures behind the QBRC deal were McCartin and businessmen Ernie Fisher and John Bosco O’Hagan, as well as the old senior management from the Quinn Group days. Initially, a key part of the deal with the investors was that the local businessmen’s shares could not be transferred to the Quinn family until the investors had left the scene. But this was seen as unnecessarily provocative, and the local figures changed the restriction so that the shares could not be transferred to anyone outside their families until the US investors had sold the businesses on.

“It was not a quick buck. If the Quinns could raise the money, they could get ownership back” after the investors had left, the source said.

However, Quinn was impatient, according to the source, and when he didn’t immediately get his way, he quickly turned on those he had worked closely with over the years.

As word spread of a split between Quinn and QBRC, the campaign of intimidation that had died down with the transfer of ownership, began to reappear. Crazy conspiracy theories were spread, according to the source. People’s lives were threatened. There was talk of dissident republicans becoming involved. A pig’s head was left outside the door of one executive’s home.

“On two or three occasions I was told it wouldn’t just be the executives, but their families too,” said one source who was intimidated. He knew the men who approached him. “They would say, ‘I’m telling you as a friend’. I said, ‘pull the trigger or f**k off’.”

The renewed campaign of intimidation, including aggressive posts on Facebook, went down badly with the local community, according to the source. It began to affect the support and sympathy within the community for Quinn and his family, and Quinn publicly called for those behind the campaign on Facebook to desist.

“People are just sick of it. They hate the bad image it creates for the area. This is a good place to live, but it was like a peep show for the rest of the world, to look at and laugh,” the source said.

Meanwhile, relations between Quinn and the US investors had gone from bad to beyond repair. They wrote to Quinn telling him to withdraw demands for a place on the board and an equity stake, but when news of this leaked, the businessman issued a statement to RTÉ denying he had sought either. He said he was the subject of a campaign orchestrated to “discredit” him.

On Thursday, it was announced there would be a parting of the ways. The source said there were negotiations with the family about the need for Quinn snr to depart the field and that this was believed to have created tensions within the family. Any chance for the family to eventually get involved again in some way, will depend on Quinn snr walking away and staying away.

While at the outset the investors feared that Quinn might be behind QBRC in some way, this is not longer the case, according to the source. Likewise, it is not believed Quinn has access to funding of any significance.

Whether he will be able to reconcile himself finally to the loss of all he created appears unlikely, according to the source.

“He loved to gamble and win. He was addicted to risk,” the source said. Now, however, the source believes, Quinn is left with little beyond anger.

Meanwhile, the businesses he created are still locally managed, employ almost 750 people directly and are to receive millions of euro in investment from their US owners.