Robots may become more prevalent than immigrants in Japan, but can they be given ‘emotional engines’? 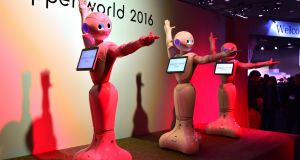 Green-eyed, diminutive and chatty, Pepper takes a break from his tireless singing and dancing: “You guys seem to be foreigners – where are you from?” he asks. When we say we’re Irish he exclaims: “Gosh, Europe has so many interesting countries. I’d like to go there someday.”

Okay, it’s not Shakespeare but then the Bard wasn’t a 28kg box of circuits and sensors gliding around on wheels. Pepper is the latest made-in-Japan humanoid robot. Unlike most of them, he can have a half-decent conversation. He can even tell if you’re sad or tired.

Telecom giant Softbank, which developed Pepper with Paris-based subsidiary Aldebaran, sells 1,000 of the pint-sized interactive charmers every month. Each new batch is instantly snapped up at a cost of about 200,000 yen (€1,600) a pop, claims Softbank spokesman Hiromitsu Yamashita.

Some of the buyers are hotels and service businesses looking for a novelty to draw in punters, but most are ordinary – if fairly well-heeled – individuals, says Yamashita. That means that thousands of families are for the first time ever living with a robot.

So has the future arrived? By 2040, predicts Softbank’s boss, Masayoshi Son, there will be more robots than people on the planet. Hiroshi Ishiguro, a professor at Osaka University and inventor of the Kodomoroid, a strangely lifelike android news anchor, says the industry is on the cusp of a revolution, similar to the take-up of smartphones and personal computers.

Of course, something similar has been predicted for decades. Pepper is the latest upstart. Softbank’s innovation was to install its machine with an “emotional engine” – sensors and artificial intelligence that understand facial expressions, gestures and vocal tones. The company even had to recently warn customers not to perform sexual acts or “other indecent behaviour” with Pepper.

For some, this is proof that we are nearing the day when pop-culture robots much like C3PO of Star Wars walk among us carbon-based mortals. In reality, Pepper is a pre-programmed toy that still struggles to achieve smooth interactivity. He stutters through most conversations with a string of misfires and non-sequiturs. And apart from entertaining children, it is not clear what he actually does around the house.

The robot drive has been given added impetus by Japan’s alarming demographics. Figures released this month show that the country’s population fell by nearly one million in the last five years. By 2060, the nation will have lost about 40 million people. The working population has already plummeted by 10 million over the last two decades, says Kosuke Motani, an economist at the Japan Research Institute, a think tank.

Japan is one of the planet’s oldest societies, with a median age of 46.5 years. Only Monaco, with its large influx of elderly retirees, is more senior. Over the next decade, the number of over-75s in greater Tokyo alone will hit 5.7 million – greater than Ireland’s entire population. Who will look after all those elderly people?

That’s a dilemma for the government of prime minister Shinzo Abe, who has raised eyebrows by pledging to raise GDP to a post-war high. Japan’s highest GDP was recorded in 1997 – with 10 million fewer workers. The gap can only be filled by introducing millions of immigrants, which Japan shows little sign of doing, or by enormously boosting productivity.

Abe appears to be putting his faith in clever machines. His aim, he said recently, is “to spread the use of robotics from . . . factories to every corner of our economy and society.” In 2014, he inaugurated the Robot Revolution Realisation Council to loosen regulations on robot use and channel funding to development projects. By the end of the decade, Japan’s robotics market could be worth 2.4 trillion yen, he predicts.

Professor Ishiguro believes his Kodomoroid is the wave of the future. Soon, he says, lifelike machines will read the news and perform countless other tasks; one of his most famous creations is a jerky mechanical doppelgänger that he says could one day deliver his lectures. “Students are not very demanding,” he says.

Such once far-fetched predictions were given a shot in the arm in December by a report suggesting that robots and artificial intelligence could replace half of Japan’s working population within the next 10-20 years. Train and taxi drivers, security guards and receptionists are among the occupations set for the chop, said the Nomura Research Institute, a Japanese think tank. Such tasks, said the researchers, rely on systematic knowledge and require little creativity – surely news to thousands of Irish service workers.

However, not everyone is convinced. Predictions of an enormous robotics impact on labour markets have been “made repeatedly for decades and we have yet to see something big happen in a very short timespan,” says Dr Kate Darling, research specialist at the MIT Media Lab in the US. Gradual, incremental development is much more likely, she forecasts.

“Current technology is not close to being able to replace humans. Tasks as simple as opening a door are still very hard for robots, and the biggest challenge that we’re nowhere near being able to solve is robots that can adapt to unexpected situations. Robots can’t deal with things outside of very limited parameters.”

Even without the great leap forward, we are already surrounded by artificial intelligence technology, points out Kohtaro Ohba, who helps run the Robot Innovation Research Center at the government-funded National Institute of Advanced Industrial Science and Technology. He cites the sensors, computers and actuators in cars, as one example. What such technology lacks, however, is feedback and two-way interaction. Could we eventually develop robots with the skills needed to look after elderly people? Ohba is sceptical.

“My opinion is that humans should be cared for by humans.” But, he adds, most care workers have to pull away from their core tasks to do other jobs, such as cleaning and transportation. Such work should be done by robots, to improve the overall quality of human care services, he says.

It may turn out that far from heralding a technology revolution, then, Pepper eventually joins the long line of expensive contrivances gathering dust in Japanese closets. Darling says such robots are useful in elderly and childcare situations only in the way that animal therapy is useful: as a supplement to human care.

“I don’t see any social robotic technology in the near future that is a good replacement for humans. Replacing human care would require much better technology and require careful consideration of what aspects get lost in the process.” Still, she says, Japan is one of several countries that could be “prematurely” pushed into using robots, “in part out of necessity.” Otherwise, the nation’s choices are stark: find the magic cure for the country’s declining fertility, or open the drawbridge to millions of foreign workers.

1 How much state pension will I get next year?
2 PTSB plays down Ulster Bank talk as it sells €1.4bn of loans
3 Am I crazy to consider switching to an Ulster Bank mortgage?
4 Avolon appoints Paul Geaney as chief risk officer
5 Brexit to curb services trade with UK, accountants group warns
6 ‘We lost money on our planned wedding in Spain. Covid saw to that’
7 Housing crisis here to stay in absence of big rethink, industry warns
8 How long can Government afford to keep State pension age at 66?
9 Up or down – how much is your Local Property Tax this year?
10 High time: Netherlands moves to clean up absurd cannabis policy
Real news has value SUBSCRIBE