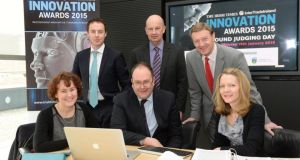 Guilt-free chocolate, a revolutionary new music creation app and a host of disruptive new cost-saving advances in medicine, engineering and tech are just a flavour of the remarkable innovations making the shortlist of this year’s Irish Times InterTradeIreland Innovation awards.

A rich vein of innovative talent has been tapped in awards. After first-round judging last week, 18 innovators have been shortlisted to go forward to the final of the prestigious competition this year.

Final entries were received up to December 1st, and seven judges spent the following six weeks working through the successful applications.

Each entry to make it through to the judging round comprised several detailed pages along with a video presentation provided using Sonru’s online interview system, as well as supporting graphs, charts and online links. The judges then scored each entry under a variety of categories before meeting to come up with the final shortlist.

This year’s first-round judges, who dedicated dozens of hours to the arduous task, were Dr Bernadette McGahon of InterTradeIreland; Tim Brundle of the University of Ulster; Marion Boland of Science Foundation Ireland; Niall Campbell of KPMG; Pat Daly of Teagasc; and Prof Frank Roche of the UCD Michael Smurfit Graduate Business School. Your reporter was also one of the first-round judges.

The finalists will now go forward to the next round, where they will present their ideas to a panel of judges that include Dr Chris Horn; Norman Crowley of Crowley Carbon; Mark Nodder of Wrights Group; Helen Kirkpatrick of UTV Media and Kingspan; Kevin Neary of Gamestop; and David Woolfson of Gabriel Scientific, the overall winner of the award in 2012.

With the dramatic growth in farmed fish, the industry faces several major challenges, not least the fall-off in Omega 3 fatty acids, which carry major health benefits to consumers.

Based on its patented seaweed-based feed, Ocean Harvest Technology has developed a new proprietary macro algae feed ingredient mix that tackles a variety of diseases in farmed fish while also increasing their omega 3 levels. Good fatty acids such as this are important for heart health.

BFree Foods made the shortlist for its new range of allergen-free fajita kits, claiming to be the first in the world to achieve a “free from” fajita range with a shelflife of up to six months and 99 calories per wrap. It’s already won significant orders from big-name Irish, European and American supermarket chains.

Dr Coy’s Health Foods offers a patented nutritional chocolate bar and drink that also fits into the growing healthy diet scene: it promises to be high in fibre and vitamin E and free of Gluten and lactose. What’s more important, it’s proved a hit in the taste tests.

The use of antibodies to treat patients is a relatively new and complex process. A key breakthrough has been in understanding how antibodies work at a DNA and amino acid level. The new drug antibody is “humanised” in order to trick the patient’s immune system into regarding it as one of its own antibodies. Treatments involving antibodies are underway in the area of cancer and rheumatoid arthritis.

However, for many years now the patented method comes with high costs and royalty payments, thereby limiting the technology to large pharma giants. With key patents now expired, Fusion Antibodies has created a next-generation antibody humanisation service, including a new software platform that has radically improved the speed and robustness of the design of humanised antibodies at significantly lower costs. That means smaller pharma and biotech firms along with academics can being development work.

Lloyds Online Doctor is very much what the name implies: an online alternative for a select number of GP treatment areas. In particular it has proved increasingly popular for the treatment of ailments such as STIs and erectile dysfunction, while also providing repeat prescriptions for the contraceptive pill/patch.

To date it has treated 24,000 Irish patients and carried out 1,000 STI tests in partnership with the Family Planning association. It treats between 500 and 1,000 patients a week at €25 per consultation.

Problems exist, however, such as the potential for one of the coils to migrate away from the intended area, and the fact that the procedure can be time consuming and costly. Embo Medical has developed a “one-shot” embolisation device that improves safety and simplifies the procedure while also reducing costs.

Co-founded by former 10CC musician and video director Kevin Godley, WholeWorldBand is an app for iPad and iPhone that allows anyone to take part in the making of music and videos, which can then be shared.

Everyone from big-name artists to complete beginners can work together to create great new sounds and visuals using just the camera and microphone on the Apple devices. What’s more, it monetises the performances for the artists who take part.

The Creativity Hub publishes games and play tools that foster imagination, empathy and self-esteem. Its toys have already won several international education awards in the US, particularly with its Extraordinaires Design Studio, which introduces children to the world of invention, design and creative problem solving.

Arckit provides reusable freeform architectural model building systems, costing a fraction of regular scaled models offered by some architects. They let clients get a better understanding of the intended design.

With potential sales in the professional sector – and the adult hobbyist market as well – it has already been well received in the market, particularly as its kit (with a price of €200) is significantly less than traditional models, which an range from €2,000 up to €10,000 depending on scale and complexity.

On the hobby front, it was stocked this Christmas in the Harrod’s toy department.

A spin-out from DCU’s National Centre for Sensor Research, Ambisense (which features in our New Innovators column this week) has created a remote cost-effective analyser for continuously monitoring landfill gas.

Surface Power Hone has created a system of solar heating and cooling for buildings using its nanotechnology-based photon daylight system. While there are several competitors in the renewable heating space – using solar hot water and heat pumps – Surface Power Hone claims significantly better results from its systems already in place.

REDT Energy has created a new patented technology that provides scalable and modular solutions for storing energy, particularly that created from renewables, using a new battery system developed by the firm.

With contactless payment systems set to feature increasingly in stores across Europe in the months ahead, Galway-based AmaTech Group has built on its already well-regarded innovations with a new system of creating a more reliable connection system for the chips on payment cards, reducing the risk of connection breaks that commonly leave the cards inoperable.

The patented innovation has huge international potential, and the firm has already completed an investment round of €2 million to finalise its production facility, which was completed at the end of last year.

Belfast-based Andor Technology has developed a range of imaging system used by scientific researchers that have become regarded as the gold standard in their field. The winners of last year’s Nobel Prize for chemistry were awarded for work on microscopy, and their research was carried out using Andor cameras.

Mayo manufacturing firm PanelDuct has revolutionised the installation of ventilation ducts in major building projects internationally, significantly cutting both the parts and installation costs involved. It has already completed several large projects in Ireland, and its patented systems are due for launch on international markets in March.

Sedici has developed an application that allows you to never worry again about forgetting your password because it will retain the password in the user’s browser but make it impossible for the user to be impersonated.

Core Systems has developed a Direct2inmate secure platform through which prisoners can directly and securely access information and services for themselves through dedicated devices. It’s in-cell devices and kiosks are now being used in prisons in the US and Europe. The tech firm developed the system after working in the prison security market for over 15 years.

Newry-based tech firm Nautilus has developed an anti-counterfeit patented technology for creating Tilt to View (T2V) labelling. This is less invasive than holograms but can feature nano embossing and printed hidden images.

With the potential of replacing holograms and other overt security technologies on labelling – for excise purposes, for example – the company is already selling T2V in international markets.

The next judging round takes place next month, with the category winners and the overall winner announced at an awards ceremony in April. This year’s event will be held at Belfast’s City Hall. Over the coming weeks we will look in more detail at the innovations entered by the 18 shortlisted companies.