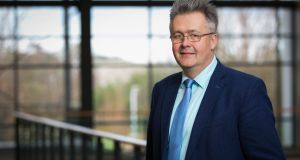 Professor Roland Erne believes a shift has taken place in the governance of the EU which has had a particular impact at national level.

In a wonderful irony, transnational action by unions and other social movements opposed to EU policies may turn out to be the saviour of the union. This seeming paradox lies at the heart of a new European Research Council (ERC) funded project led by Prof Roland Erne, Jean Monnet Chair of European Integration and Employment Relations at the UCD Business School. Erne was awarded one of two European Research Council (ERC) Consolidator Grants across all disciplines presented to Irish based researchers under the last ERC funding round. The award is for a research project entitled Labour Politics and the EU’s New Economic Governance Regime (European Unions), which aims to explore the challenges and possibilities that the EU’s new governance regime poses to labour movements.

Erne explains that a shift has taken place in the governance of the EU which has had a particular impact at national level, and not always a good one. “Until recently, European labour politics has mainly been shaped by horizontal market integration through the free movement of goods, capital, services and people,” says Erne. “After the financial crisis, this has been complemented by vertical integration effected through the direct surveillance of member states. The resulting new economic governance (NEG) model opens contradictory possibilities for labour movements in Europe. ”

This model has seen the EU begin to behave more like a business corporation in its approach to governance. “They have been monitoring what member states do using key performance indicators in the same way as a multinational corporation might measure the performance of subsidiaries,” he notes.

In specific, he points to the adoption by the EU in 2011 of six new areas in which it could monitor member states and intervene if necessary. This has become known, not always fondly, as the “six pack” and it allows the commission and the council to issue scorecards for member states’ performance against a number of measures including public debt levels, current budget deficits, and the environment.

“Governments are required to set sustainable budgets,” Erne adds. “For example, the fiscal space that we heard so much about here is determined by the six-pack. We now have a much more interventionist tendency on the part of the EU than we did before 2011. Up until the crisis there was a belief that labour law and so on would converge naturally following the creation of the single market. The perspective changed after the crisis. They realised that the Keynesians were right and that you can’t have economic and monetary union without the authority to set standards across the EU.”

However, the policy interventions which followed tended to favour business much more than labour, according to Erne. This led to a sense of alienation on the part of many people which in turn fuelled the rise of nationalist counter movements with results like the Brexit vote and the recent Italian elections.

“People forget that as recently as 1989 the Italian people voted by 88 per cent to 12 per cent in favour of European integration,” Erne points out. “On the other side, however, we are starting to see unions and other social movements cooperating across borders. The European Federation of Public Service Trade Unions recently succeeded in organising a Europe-wide petition under the terms of the Lisbon Treaty which has called for the right to water as a human right under European law. Water isn’t just an Irish issue. We have seen movements in Italy and Berlin and other cities and states in relation to keeping the ownership of water utilities in public hands.”

He believes that transnational movements like this have the ability to rescue the EU. While EU actions may be fuelling nationalism and anti-European sentiment, in some cases they might also create the conditions to bring people together across national boundaries and strengthen the union in the longer term.

Erne’s five-year research project will look at three areas where such transnational action might occur: water, transport, and healthcare. “We will compare two large countries, Germany and Italy, and two smaller peripheral countries, Ireland and Romania. We want to see how unions and social movements in different places respond to issues in these areas. We want to see if water is an isolated case or if we might see European action in support of the right to healthcare or transport.”

He believes the EU has much to gain from the project as it has the potential to develop a new scientific paradigm which is capable of accounting for the interplay between EU economic governance, labour politics and EU democracy. “Even business leaders might gain something out of it,” he concludes. “The cost of Brexit shows that these things shouldn’t be taken too lightly.”