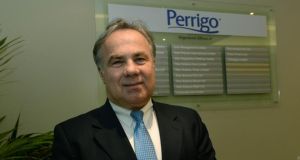 In a statement, Perrigo said it had done a deal with Canadian group Transition Therapeutics, the partner in the ELND005 programme, to progress its clinical development as a therapy for Alzheimer’s disease, bipolar disorder and Down syndrome.

Under the transaction, Transition Therapeutics will acquire all of the shares of the Irish Perrigo subsidiary responsible for developing ELND005. Perrigo will also pay $15 million for which it will receive 2,255,640 shares in Transition as well as milestone payments if the drug is eventually commercialised.

Separately yesterday, Perrigo announced it had acquired a portfolio of over-the-counter products in Australia and New Zealand. The $51 million cash deal will see Perrigo take over a range of analgesics, vitamins and supplements from a company called Aspen, which currently sells primarily through supermarkets.

The US company, which moved its headquarters to Ireland as part of the Elan deal, said the acquisitions were expected to generate sales of at least $20 million this year.