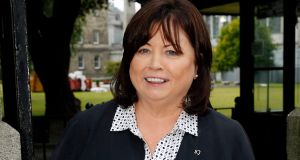 Former tánaiste and minister for health Mary Harney has joined the board of nursing home group Brindley Healthcare.

Ms Harney was introduced to Brindley, one of the largest privately-owned operators of nursing homes in the State, by BGF, a growth capital investment company that recently put €10 million into Brindley.

Ms Harney and Leo Casey, the head of BGF in Ireland, have both been appointed as directors on the Brindley board.

The former politician said she was delighted to be working with Brindley and BGF on “very exciting and ambitious” plans.

“As our population ages, the nursing home sector will grow in importance in Ireland and I think there is a real benefit to having professional, indigenous operators like Brindley leading out the development of this sector,” Ms Harney said.

Brindley was established by its chief executive Amanda Torrens in 2000 with a 25-bed nursing home in Co Donegal. Following a number of acquisitions and the development of new facilities, it now consists of eight nursing homes with a combined capacity of more than 400 beds in Donegal, Galway, Mayo, Kildare and Laois.

The BGF investment will be used to fund further acquisitions and growth.

The Brindley board is chaired by Noel Daly, a former chief executive of An Bord Altranais, the statutory regulator now known as the Nursing and Midwifery Board of Ireland.

The former leader of the now defunct Progressive Democrats party has taken positions on a number of boards in the healthcare sector since retiring from politics in 2011. They include the boards of the Irish Hospice Foundation, the Irish pharmaceutical group Pharmed and Biocon, the publicly-quoted Indian biopharmaceutical group.

Ms Harney was also appointed chancellor of the University of Limerick last year.

BGF, a highly active UK venture capital firm, entered the Irish market in 2017 and has up to €250 million to invest in growing Irish SMEs.

It is backed by the Ireland Strategic Investment Fund and the three major banks, AIB, Bank of Ireland and Ulster Bank. The fund is targeting equity investments of €1 million-€10 million, with further funding available in subsequent rounds.

“When we partner with a company, we like to introduce people with valuable skills and experiences to augment the board and we are delighted that Mary Harney has agreed to join the board of Brindley,” Mr Casey said.

“Mary has a wealth of experience in the healthcare sector in Ireland and internationally.”

Ms Torrens also welcomed Ms Harney to the board. “Her experience and insight will play a key role in helping us to achieve our ambitions in the years ahead.”