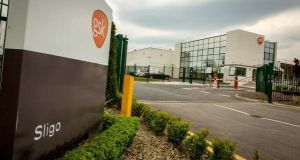 GlaxoSmithKline said its other operations in Ireland (manufacturing sites in Cork and Dungarvan, and commercial operations in Dublin) will not affected by the Sligo closure

Sligo suffered a jobs blow on Thursday with the announcement that the GlaxoSmithKline-owned Stiefel Laboratories is to close.

The company has confirmed that the shutdown will occur on a phased basis over three years, with the loss of 165 jobs by 2021.

Workers were called to an emergency meeting on Thursday, where the news was broken.

Local Fine Gael TD and assistant Government whip Tony McLoughlin said that the decision was a very disappointing announcement for Sligo and the hard-working employees at the GlaxoSmithKline (GSK) operation. He said the immediate concern of the Government was for the workers and families directly impacted by this development.

Sligo-Leitrim Fianna Fáil TD Marc MacSharry said the impact of the phased job losses over the coming years could not be underestimated.

“This company has been a feature of the local community for over four decades and has been a major employer in the region,” he pointed out.

Mr MacSharry called on the Taoiseach and the Minister for Enterprise, Heather Humphreys, to engage with management “to establish if there are any circumstances by which the company could continue its operations in Sligo”.

Stiefel opened in Sligo in 1975 with a workforce of just 10. A spokeswoman for the skincare manufacturing company said employees had been informed of the proposal, which would affect approximately 165 staff.

She said production would be phased down over three years “before decommissioning the site in the latter part of 2021”.

In 2009, just four months after Stiefel was taken over by pharmaceutical giant GSK, it announced that the plant would close by 2013 with the loss of 250 jobs.

But in 2012 the operation got a reprieve.

GSK consumer health had decided at the time to increase the focus on its dermatology/skin health business, with plans for a series of product launches. Plant executives in Sligo – which had been involved in pharmaceutical creams before the takeover – made the case, with IDA Ireland support, that it could deliver in that area.

As a result, GSK said it would invest €10 million in its Sligo facility, and that 120 jobs would be safe, with a further 50 jobs to be created.

At the time, Roger Connor, GSK president and head of global manufacturing and supply, said a key factor in the decision was the excellence and work ethic of the Sligo workforce, whom he met when he came over to thank them after the original decision was made to close the plant.

In a statement the company said that in recent years, its Sligo site had delivered significant improvements in cost and efficiency.

“However, demand for the products made on-site has not grown in line with previous expectations, due to the highly competitive market in which we operate, making our current business model unsustainable,” it added .

The spokeswoman said: “We have not made this proposal lightly. We thoroughly evaluated a number of alternatives for the Sligo site; none of them were considered feasible without significant further investment.”

Paying tribute to the workforce, she said the site was staffed by highly skilled professionals, dedicated to delivering quality skincare products. “We understand the impact of this proposal on our employees, their families, and the local region. Our immediate priority is to support them through this difficult period.”

GSK said its other operations in Ireland (manufacturing sites in Cork and Dungarvan, and commercial operations in Dublin) were not affected by this proposal.

Mr McLoughlin said the Government would make every State support available to the workers at GSK in Sligo.

Describing the news as “ deeply regrettable”, he insisted that the overall trend in terms of job creation in Sligo has been extremely positive following recent jobs announcements by Phibro, Abbvie, Abtran , E3 Retail and Live Tiles.