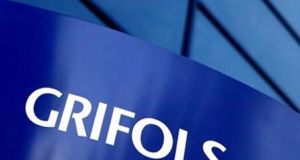 Grifols, a Spanish healthcare company that recently moved its corporate treasury activities from Barcelona to Dublin, has acquired a 49 per cent stake in the US-based Interstate Blood Bank (IBB) for $100 million (€88m).

The company has also entered into an option agreement to purchase the remaining 51 per cent stake for an additional $100 million, and has agreed to pay $10 million to exercise the call option.

The principal business of the Memphis-headquartered IBB is the collection of plasma for the plasma fractionation industry. The deal for the company is expected to close within a month once clearance from US anti-trust authorities has been granted.

Full-year earnings before interest, taxes, depreciation and amortisation (ebitda) was up 11 per cent to €1.16 billion with an ebitda margin of 29.5 per cent.