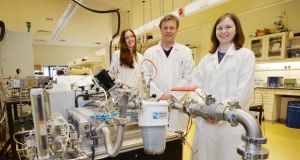 Scientists in Dublin, Canada and France have built a new kind of biosensor based on the use of graphene that can detect cholera toxins. It provides a reading in minutes in contrast to current detection methods that can take hours.

Long hailed as an important discovery for the electronics industry, graphene now looks set to also play a role in biological sensing. The researchers say their sensor could be used to provide an early diagnosis for cancer or near instantly identify infectious diseases.

“We used cholera because it is an important toxin but there is no reason why this method could not be used in any other chemistry or other toxins,” he says. The work is described in a paper published in the Journal of the American Chemical Society.

Graphene is a form of pure carbon that readily forms into layers just a single atom thick. It is transparent, conducts electricity and has other properties of interest to the electronics industry, but it is less well known in a biological context.

The researchers came across very useful properties however that had an immediate impact. “We are using graphene as double sided sticky tape,” Prof Duesberg says. The graphene layer clings tightly to the sensor surface but also holds the biological indicator that can read the presence of the cholera toxin.

“It was a side effect,” he says but patents were quickly taken out and the lab will attempt to commercialise the approach.

Researchers at the Amber lab were ideally placed to pursue this research. “Trinity is really good at developing sensors, this is what we do here. And sensing, specially biosensing is really booming so there are many requests coming in based on making sensors with this material,” he says.

Trinity is also very good at producing and handling the graphene used in the new biosensor, he says. “We grow it as a single layer on a catalyst to get sheets of very high quality material.”

“It must be formed as a single atom layer and we can do this quite well,” he says. It is also a challenge to lift the layer off of the catalyst without damaging it.

“Clean transfer of the graphene is one of our areas of expertise. It must be clean. If you can’t lift it clean it won’t work.”

He has led a research group of 10 to 15 scientists for the past five years, using funding from Science Foundation Ireland. Prof Duesberg is also a member of the EU’s “Graphene Flagship”, a large scale collaboration involving the work of 142 partners in 23 countries.

The flagship’s goal is to take graphene and similar two-dimensional materials out of the laboratory and bring new discoveries and products into society.

The new biosensor relies on a long-established optical readout technique called surface plasmon resonance. This is already used in medical diagnosis and could provide lab-on-a-chip sensors.

“We showed experimentally that simply the addition of graphene led to a clear increase in the sensor signal. This type of sensing platform offers a large variety for medical diagnostics since it can be adapted to almost any type of disease markers,” Prof Duesberg says.

Graphene’s ability to boost this signal brings important advantages, says Dr Holzinger. The sensitivity will give faster results but also makes it easier to detect very small amounts of the biomarker for a disease. This provides earlier diagnosis for conditions such as cancer, Dr Holzinger says.

The biosensor was also applicable for other types of infectious diseases such as malaria and TB, he says. The next stage in the research will be to look at other ways graphene might be able to add functionality to sensor development.

Amber, Advanced Materials and BioEngineering Research, is a Science Foundation Ireland-funded centre that sets up a partnership between academic researchers and the private sector.

The lab works in collaboration with Crann, the Centre for Research on Adaptive Nanostructures and Nanodevices. University College Cork and the Royal College of Surgeons of Ireland are also involved in Crann.