The first start-up night of the Start-up Academy saw 180 entrepreneurs of all sorts gather to share tips and insights. 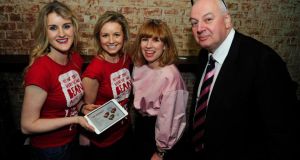 The room, laid out with sofas and stools, was full. Some 180 entrepreneurs crowded into the upstairs part of 4 Dame Lane. Asked at registration who they wanted to network with, 19 said they were seeking a co-founder; 23 wanted to meet a sales or marketing person; 16 wanted to meet a technical expert. But most said they just wanted to meet other start-ups.

And that is what happened.

The format was borrowed from the standard tech startup event template: shabby-chic couches, relaxed dress code, and snappy pitches from the stage. But the mix of attendees went far beyond the normal tech meet-up. This is foosball-table networking, with all the tropes of Silicon Valley, for the tech and not-necessarily-tech-minded alike.

Entrepreneurs from all sectors rubbed shoulders. Ideas ranged from dog training to eco lighting for apartment blocks. Some attendees had yet to launch their ventures, others were far advanced.

A hush descended, however, for the main speakers. Bobby Kerr spoke first. Kerr, the Chairman of Insomnia Coffee, and a recognisable face from RTE’s Dragon’s Den, had made the leap to becoming an entrepreneur in the most extraordinary of circumstances: he had a steady, well paying job with Bewleys, a big mortgage, and four kids for whom to provide, and was approaching early middle age.

And yet, he felt the need to build a business of his own. That meant a clean break with the day job. Staying where he was would have made him the worst of both possible worlds: a disgruntled employee, and a founder not fully committed to his startup.

Kerr shared the good and the bad. He was admirably honest about his mistakes, and told the audience of entrepreneurs that research, particularly about location and market, ahead of embarking on a retail venture is critical. Several times he had suffered major reversals because he had not done the research. Kerr also told the audience to focus on what they love, and to hold on to the fear of failure. That fear, he said, would save them from disaster when times were tough.

Sonya Lennon, the fashion stylist and designer, spoke about the varied sources of funding and support available to entrepreneurs, some of which are solely available to female entrepreneurs. FrockAdvisor is her latest venture with longtime collaborator Brendan Courtney. Whereas their fashion line LennonCourtney poses challenges of stock management and manufacture, FrockAdvisor is a technology startup, and poses an entirely new challenge of managing tech staff.

Finally, before the bar reopened and networking resumed, three very different types of startups pitched the crowd. Loylap, FoodCloud, and CoolBeans. Patrick Garry of Loylap presented his app through which shops in a town could gather together an operate a local scheme of transferrable loyalty points through their smart phones.

Next up was FoodCloud, a social enterprise that enables supermarkets and food vendors to dispose of surplus food by offering it to charities. The service has started to work with Tesco, Starbucks (Kerr took note of that), Supervalu, Centra, and Musgraves. It’s early days, but already FoodCloud has redistributed almost seven tones of food.

The last presentation on the night was from CoolBeans, a young company producing gourmet baked beans as a healthy alternative to standard microwave meals. And that is the pitch: convenient to cook, and easy to store, the beans have just 54 calories per 100g, and are low in fat, sugar, and salt.

The evening continued with a scramble for the videographer as attendees pitched their ideas on camera for irishtimes.com. Each of them different. Radically different. But among all of them there is something shared: an optimism, a zesty kind of madness. And this was precisely what Kerr had spoken about.

He had taken only £56 at the end of his first day in his first store in Grafton Street. He saw all the sandwiches he had made in that morning lying uneaten by closing time and knew he had made the biggest mistake of his life. He had failed. But a month later he could see the sandwiches moving, and knew that the future was looking up. Optimism and perseverance paid off.