Who is property developer Sean Mulryan?

Epitome of the Celtic Tiger-era developers who dominated during boom 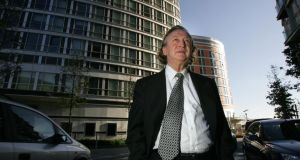 Sean Mulryan is known for throwing lavish boomtime parties, the hiatus on which appears to have been lifted in recent times. Photograph: Frank Miller/The Irish Times

Sean Mulryan is the epitome of the Celtic Tiger-era developers who dominated the Irish business community during the boom.

When the crash came, Mr Mulryan and businesses linked to him, such as his Ballymore property group, owed Irish banks almost €2.5 billion.

He has co-operated with his lenders, including Nama, to repay most of his debts.

Mr Mulryan was born into modest family circumstances in Roscommon, where he left school to work as a bricklayer.

He built his first house for profit in his early 20s and by the early 1990s he was one of Ireland’s biggest house-builders.

He later invested heavily in London, acquiring vast land banks in east London that soared in value when the city was awarded the 2012 Olympic Games. London remains the main focus of the Ballymore group.

Mr Mulryan also invested in commercial developments across central Europe with the late home-builder Paddy Kelly, but he has since gradually withdrawn from most of these markets. His Irish investments include the Whitewater shopping centre in Kildare.

A former member of the Drumaville consortium that once owned Sunderland football club, Mr Mulryan is a fixture at Irish society and sporting events, such as race meetings.

He was once considered close to Fianna Fáil and is friendly with former taoisigh Bertie Ahern and Brian Cowen.

Mulryan is also known for throwing lavish boomtime parties, the hiatus on which appears to have been lifted in recent times.