Other winners include Fexco, Xtremepush, AQMetrics, Fenergo and Ulster Bank 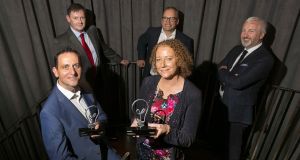 The Kilkenny-headquartered company, which facilitates global payments in 134 currencies across 162 countries, was also named the winner within the product or service category for its Global Invoice Connect solution.

The awards, which are in their first year and recognise innovation by Irish financial services companies, is run by Deloitte in partnership with Financial Services Ireland (FSI) and Banking & Payments Federation Ireland (BPFI).

More than 100 submissions were received for the awards, which comprised nine categories, including overall winner.

The winners were announced at an event in Dublin on Friday attended by more than 150 business leaders.

There was a double win for Fexco with chief executive Denis McCarthy named as best leader and the company coming first in the social or sustainable entrepreneurship category.

InvoiceFair, a company founded by Helen Cahill and Philip Hickey which provides alternative funding options for SMEs, was named most disruptive fintech.

Xtremepush came top for customer experience, while AQMetrics and Fenergo were jointly named best RegTech. Ulster Bank was the winner in the learning category while the Institute of Banking was awarded for best operations.

Speaking at the awards ceremony, Minister of State at the Department of Finance Michael D’Arcy said financial services has long been a priority sector for the Government.

“The development of our international financial services sector has been one of the highlights of Ireland’s economic development over the last 30 years. It is innovation that will be key in ensuring that we maintain what we have and to continue enhancing our IFS sector,” he said.

The judging panel comprised: David Dalton, head of financial services at Deloitte; Julie Sinnamon, chief executive at Enterprise Ireland; Brian Hayes, chief executive of BPFI; Joe Duffy, chairman of the FSI executive board and country executive for BNY Mellon in Ireland; Ciarán Hancock, business editor of The Irish Times; and Mai Santamaria, head of the financial advisory team at the Department of Finance.