All three accused of conspiring to destroy, mutilate or falsify documents 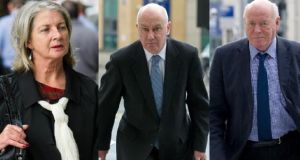 Three former bank officials at Anglo Irish Bank have been found guilty on all charges against them at the Dublin Circuit Criminal Court.

They had pleaded not guilty.

All three were accused of conspiring to destroy, mutilate or falsify documents relating to accounts of John Peter O’Toole, the brother-in-law of Mr FitzPatrick.

Before the verdicts were delivered, judge Patrick McCartan asked the foreman of the jury whether his wife was a friend of Ms Maguire. He said the Director of Public Prosecutions office had received an anonymous phone call alleging they were friends.

The foreman said no and the verdicts were then delivered.

The judge then told the foreman he was sorry for having embarrassed him and he was satisfied with his answer. He said the verdict, particularly in relation to Ms Maguire, flew in the face of the allegations made by the caller.

Referring to the contacts with the DPP, after the jury had left, the judge said the events before lunch gave him considerable concern and he regretted to say the accused must remain in custody before sentencing.

The defence teams then made applications on why the three accused should not be remanded in custody pending sentencing. They highlighted the defendants’ ages and their previous clean records.

But the judge said the primary consideration was that they had been found guilty. The consequence of a conviction was custody and being sentenced.

He remanded all three in custody pending a sentence hearing tomorrow at noon.

The first offence, against Mr Daly and Mr O’Mahoney, attract jail terms of up to five years. The offence of conspiracy has not been specifically spelled out in statute and will be for the judge to assess.