Report exposes shambolic way in which INBS was being run 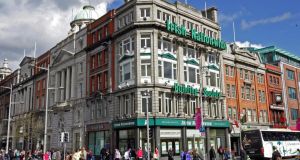 The Central Bank does not name names in its damning report into Irish Nationwide Building Society.

No mention is made, therefore, of the enigmatic Michael Fingleton, who ran the wayward institution for 38 years before its costly demise. Nor is mention made of Dr Michael Walsh, chairman of INBS from 2001 until it was on the brink of implosion in 2009.

It was on their watch, however, that rampant malpractice festered in INBS. Numerous loans and additional advances were never approved by the society’s board or credit committee. No security at all was taken for certain commercial loans. In some lending cases where security was obtained, valuation reports were not carried out on the assets in question before money was advanced.

While 65 per cent of commercial lending involved profit-share agreements before the collapse, there was no formal credit risk policy on such arrangements.

And it goes on and on. Established in 1873, INBS survived the vicissitudes of 20th century business in Ireland only to founder quite rapidly after the crash of 2008.

The collapse cost taxpayers €5.4 billion. This equates to 17 per cent of all tax revenue in 2010, when the public finances reached their nadir and the State reluctantly succumbed to external aid.

This is the backdrop to the Central Bank’s five-year investigation into commercial lending and risk management at INBS, whose commercial loan book grew to €8.2 billion at the end of 2008 from €3.6 billion in 2004.

The institution then incurred a loss of more than €6 billion between 2008 and 2010, the bulk of it shouldered by taxpayers. The discount applied on the transfer of its loans to Nama was the largest of all participating lenders.

The findings of the Central Bank, which describes the examination as its “most significant and extensive to date”, are devastating. Even if they are not entirely surprising, they paint a dire picture of an expanding institution lending ever-increasing volumes of money with scant regard for its own rules or those of anyone else.

In summary, INBS ran amok. The society admitted breaches under seven categories of lending and risk management procedure within the society itself. According to the Central Bank, the evidence suggests the institution broke its own rules more than 1,000 times. In addition, the Central Bank cites 21 contraventions of three separate pieces of legislation.

The totality of these breaches was enough for the Central Bank to impose a €5 million fine on INBS. The rump institution which survives to this day has no assets, so the Central Bank said it would not pursue collection of the fine as to do so would not be in the public interest. As it stands, the entire matter is now settled between Dame Street and the INBS body corporate.

At the same time, however, the Central Bank has empanelled a follow-on inquiry into the activities of “certain persons concerned in the management of INBS” in relation the society’s affairs. While it is understood that the number of individuals in question is fewer than 10, the Central Bank will not say who they are.

It would be extraordinary if Fingleton was not a subject of this examination. For all the laxity and flaws set out in the Central Bank findings yesterday, he received a €1 million bonus from INBS not long after the 2008 guarantee. This payment seemed to epitomise Fingleton’s blinkered grandeur at a time when the institution he dominated for decades was on life support from the State.

It also reflects gaping governance weaknesses within INBS itself, an abundance of which were set out in the Central Bank findings. These went right up to the board of the institution, which did not receive key reports on commercial lending at INBS at a time when such lending was advancing rapidly.

The Dame Street report cites INBS’s admission to an internal systemic failure to ensure that commercial loan applications were processed in line with its own policies and procedures.

“This includes instances where no commercial loan application was prepared for certain loans or situations where applications were only prepared after funds had been drawn down by borrowers,” said the Central Bank.

“It also relates to loans where required information was not obtained from borrowers which would have allowed INBS to assess that borrower’s repayment capacity and instances where credit grades were not assigned to commercial loans as part of INBS’s credit decision-making process.”

If this on its own was enough to turn standard banking practice on its head, there was much, much more.

“There are multiple alleged instances of variations being made to loans without the requisite approval being obtained, including extensions to the term or moratoria on loans, or changes to security or repayment terms on loans.

“In addition, it appears that updated commercial mortgage offers (CMOs) were not being issued following variations to loans as required by INBS’s policies.

“Finally, it appears that there were multiple deficiencies with respect to the CMOs being issued by INBS, for example, CMOs being issued prior to approval, funds being advanced to borrowers before CMOs were signed properly, CMOs containing different terms to those which had been approved by the credit committee or the board or, at the most basic level, CMOs not being appropriately signed.”

Of weaknesses in loan security, the Central Bank said INBS admitted to failing on a systemic basis to adhere to its own policies. “There are instances where it is alleged that no security at all was taken for certain commercial loans or where, for borrowers which were private companies, personal guarantees were not obtained from the shareholders or directors,” said the report.

“There were alleged failings at a number of levels within INBS with respect to the monitoring of commercial loans, firstly by the commercial lenders themselves who did not monitor the loans in their portfolio, by the managers who failed to ensure that such loans were monitored and by INBS’s credit review function.

“For example, it is alleged that INBS’s credit review function was not reviewing its top 100 commercial creditors, or group of connected creditors, known as ‘Large Exposures’ and, for the loans which were being reviewed, it is alleged that the output of the reviews was not being properly communicated to the lenders responsible for the loans. Finally, there were also alleged failings in relation to the provisions committee in circumstances where the results of the credit reviews which were performed were not being taken into account as part of INBS’s process of provisioning for loans.”

Of the credit committee, INBS admitted it did not perform its functions in line with internal policy.

“One of the credit committee’s functions was to consider non-performing commercial loans or those in large arrears, as well as loans arising from the credit review process. INBS has admitted that this did not happen. In addition, the credit committee should have been considering reports on INBS’s exposure to specific sectors or customers but failed to do so.”

Then there were reporting obligations to the INBS board. “Under its own internal policies and procedures, INBS was required to provide certain reports relating to commercial lending and credit risk management to its board of directors. INBS has admitted to an internal systemic failure to ensure that the relevant reports were provided to the board of directors between 21 December 2005 and 30 September 2008.”

“The quarterly review would have given the board information on, among other items, INBS’s large exposures and on the sectoral and geographical profile of the commercial loan book, thus allowing it to monitor and manage credit risk and assess strategy.”

The Central Bank also said there was a failure to provide directors with the results of annual credit risk stress-testing. “This report would have facilitated the board in assessing INBS’s ability to withstand potential loan losses and thus would have informed the board’s risk appetite and overall strategy.”

Of deals which would see INBS take a 30 per cent profit share with borrowers on a development, the Central Bank criticised the failure to establish a formal risk policy to guide decision-making.

“As a result, INBS failed to put in place an important internal control in relation to a significant aspect of its business and failed to ensure that the sophistication of its risk management processes was appropriate in light of INBS’s risk profile and business plan.”

All told, it is a litany of error and irresponsibility.