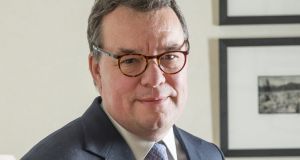 Funds under management at insurer Standard Life Ireland grew 20 per cent last year to €9 billion on the back of record sales as its parents confirmed it was making contingency plans for Britain’s possible exit from the European Union.

The company’s Irish subsidiary reported overall sales of €1.36 billion in 2015, also up 20 per cent versus the previous year.

Standard Life Ireland reported said Trustee Investment Plans (TIP) or institutional-only investment sales, of €500 million, up 30 per cent on the prior year and the strongest on record. Retail product sales rose 16 per cent on the back of strong contributions from approved retirement fund pensions (ARFs) which increased 27 per cent, and executive pension plan (EPPs) sales, up 41 per cent.

Sales of the company’s monthly investment plan known as Synergy Regular Invest, jumped 26 per cent on the back of increased confidence in long-term saving by consumers.

“In 2015 we continued to grow our assets under management significantly with a strong broadening of our financial adviser and customers support base,” said Nigel Monaghan, head of Standard Life distribution.

The group’s parent posted an above-forecast pre-tax operating profit of £665 million for 2015 with assets under administration up 4 per cent to £307.4 billion,

Standard Life said its solvency capital ratio under new European capital rules was 162 per cent of the minimum requirement. The company said it would pay a total dividend of 18.36 pence per share.

The Edinburgh-headquartered group’s chief executive Keith Skeoch said Standard Life would gain from continued access to Europe’s single market as he confirmed it was making contingency plans for a possible “Brexit”.

“It would be in the best interests of customers and clients that we continued to benefit from access to the single market,” Mr Skeoch said, although he stopped short of expressing a view on whether or not Britain should stay in the EU.