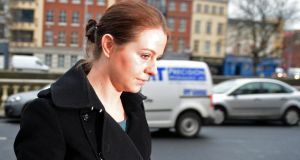 Aoife Quinn, in an affidavit on behalf of her mother and siblings, said her family “cannot be expected to have any confidence” in the discovery process undertaken by IBRC”. Photograph: Eric Luke/The Irish Times

Family members of bankrupt businessman Seán Quinn say they have no confidence in a disclosure of documents process by Irish Bank Resolution Corporation (IBRC), which they are suing over the alleged unlawful issuing by Anglo Irish Bank of €2.3 billion in loans to family companies.

The Quinns say the system of revealing the material, including the contents of phone calls to the former Anglo Irish Bank,was deficient and means they cannot have confidence in the overall process of legal discovery in advance of their High Court action.

They want Ms Justice Caroline Costello to strike out IBRC’S defence or order better discovery in compliance with a July 2012 court order. The judge reserved her decision.

The Quinns suggest experts in electronic discovery from both sides should meet to sort out differences over how thousands of phone calls and electronic documents relevant to the case could be retrieved and assessed. IBRC argues it has complied with discovery using the latest technology to trawl through all the material to find what is relevant.

Aoife Quinn, in an affidavit on behalf of her mother and siblings, said IBRC’s failure to disclose all relevant information was typified by what it did provide in relation to phone calls made to Anglo during the relevant period. At best, Ms Quinn said, it appeared between 14,000 and 18,000 phone calls were reviewed and of those only 278 were deemed (by IBRC) to be relevant.

However, in a later letter from IBRC’s lawyer, it was stated there were about 130,000 phone recordings and later that figure went up to nearly 2.2 million calls, Ms Quinn said. The Quinn family “cannot be expected to have any confidence” in the discovery process undertaken by IBRC.